After a busy day and a strenuous hike, we decided to take it “easy” for our second day – starting off with a driving trail through Titus Canyon.  Here is how the park brochure described the trail:

Titus Canyon – The largest and most diverse canyon in the Park.  Within its lofty walls visitors can find volcanic deposits, a ghost town, petroglyphs, bighorn sheep, and deep, winding narrows.  It is accessible to high clearance vehicles via a 26 mile, one way dirt road. The trip will take about 3 hours.

After driving it, Judith has re-named it “Terror Trail”!  The sign at the start of the road saying “high clearance vehicle recommended” is a major understatement! There were ruts and washes at least a foot deep in places, as well as lots of rocks.  But, the real thrill was the hour or so in the middle, driving on a winding track around the mountains with one wheel scraping the mountain wall while the other had about a foot of room before reaching the cliff edge! The door handle on Judith’s side has permanent imprints from her grip! (Well, almost.)

But the sights were great – even though we didn’t see any bighorn sheep.  The Desert Bloom continues, and we made a new friend! 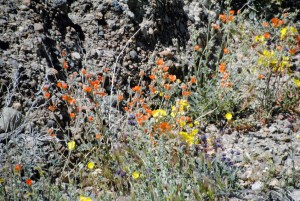 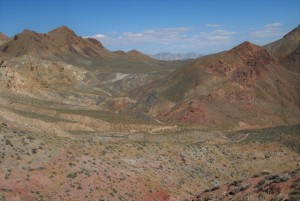 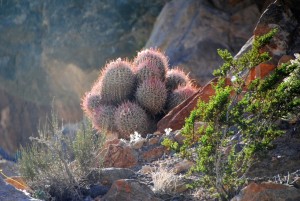 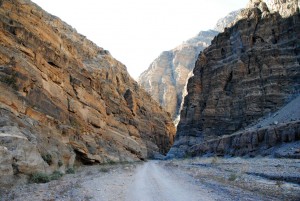 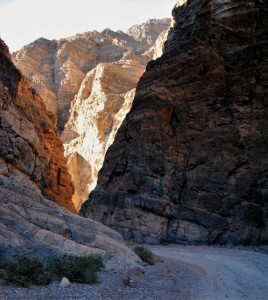 After the four plus hours it took us to drive the “Terror Trail”, we wanted something very sedate.  So we went to the Mesquite Flats Sand Dunes.  Delightful & mysterious. 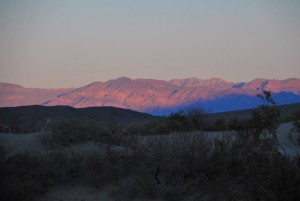 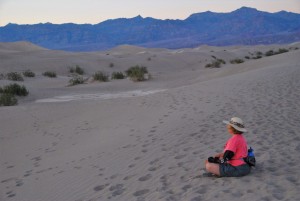 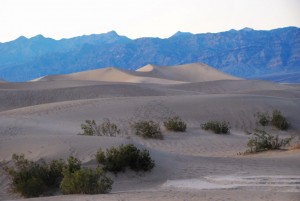 To wrap up the day, we stopped at a (mostly) out of the way rest area to watch the stars.  Death Valley is an oasis of dark nights in an increasingly bright world.  Living around big cities and towns, we cannot see the Milky Way, or Cannis, or the Little Dipper … or many other items in the night sky.  We didn’t plan this, so I didn’t take the tripod – we just enjoyed looking at the stars.