We had been told by other volunteers at the Palatki Heritage Site near Sedona that a “must see” for petroglyphs was the Rock Art Ranch near Winslow, AZ.  We had several days available to make our trip from Albuquerque to Phoenix, so this seemed to be the perfect time to visit there.

This is a private cattle ranch, and they give tours by appointment as a side activity.  I called to make arrangements & left my name and number.  The owner, Brantley Baird, called back the next day with arrangements and directions to the ranch, about 18 miles outside of Holbrook — with half of that on dirt roads!  But it was worth it!

The entrance area had dozens, maybe hundreds, of pieces of beautiful petrified wood, plus other artifacts from the ranch’s history. 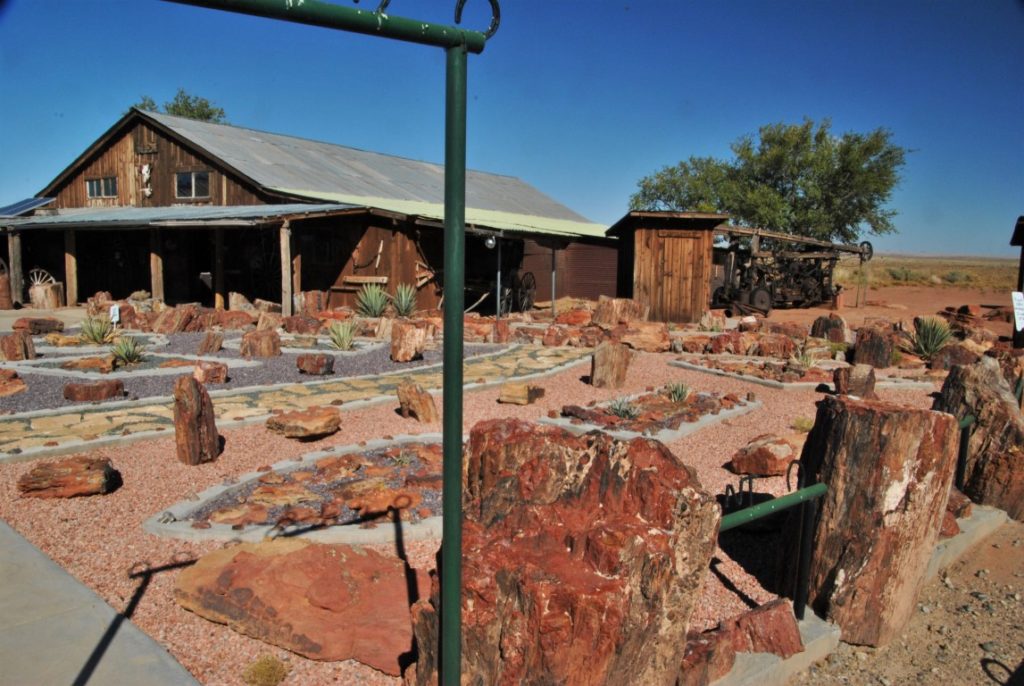 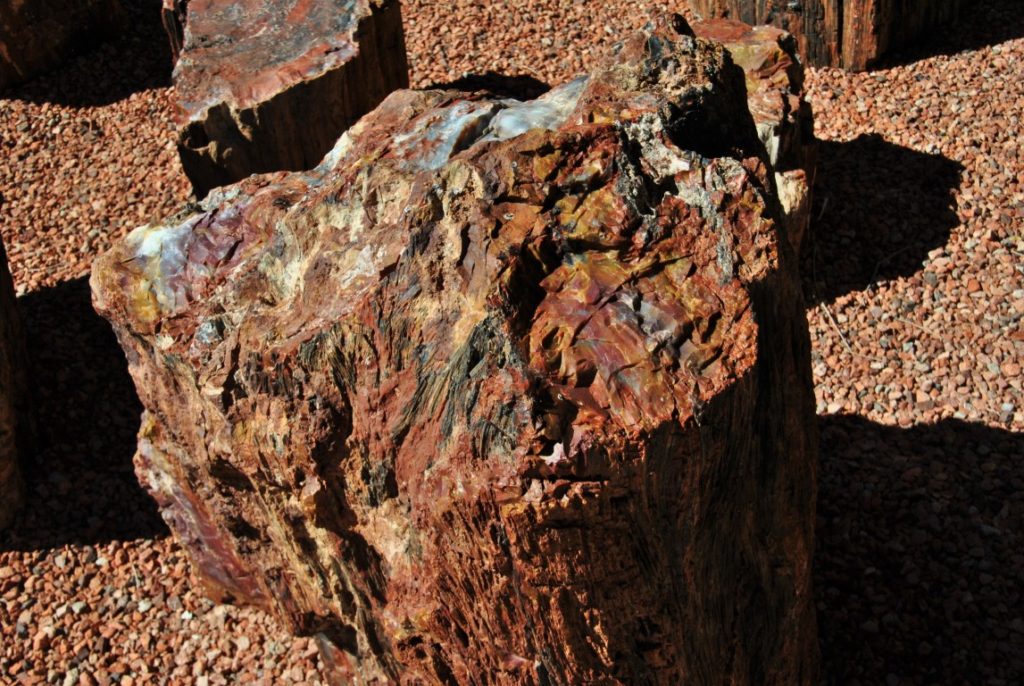 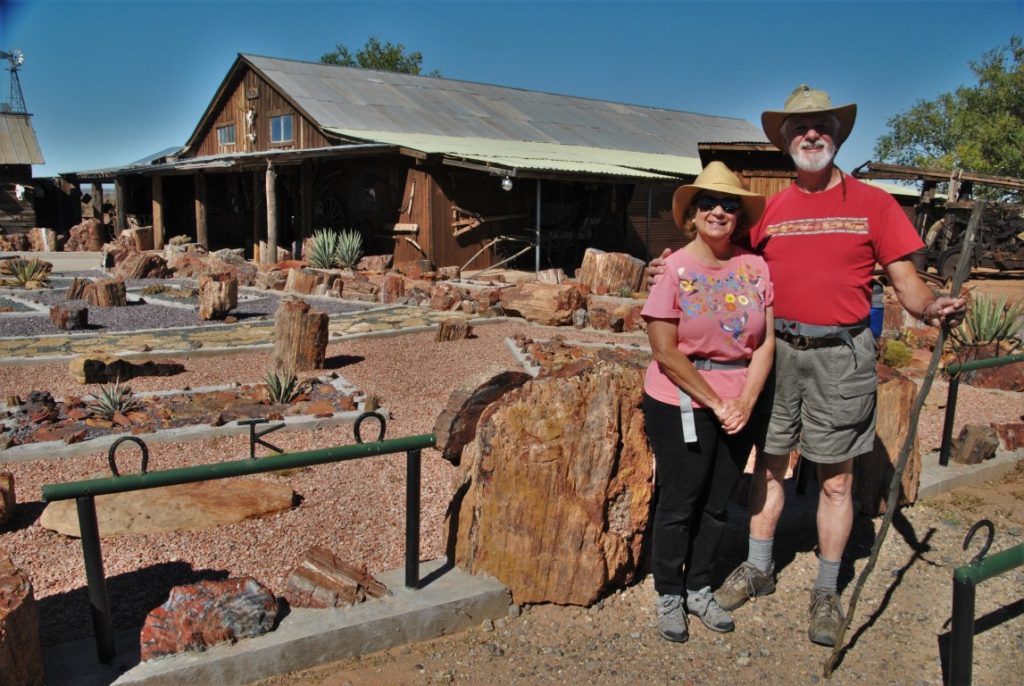 The ranch buildings housed a “museum” of old west and native american artifacts! 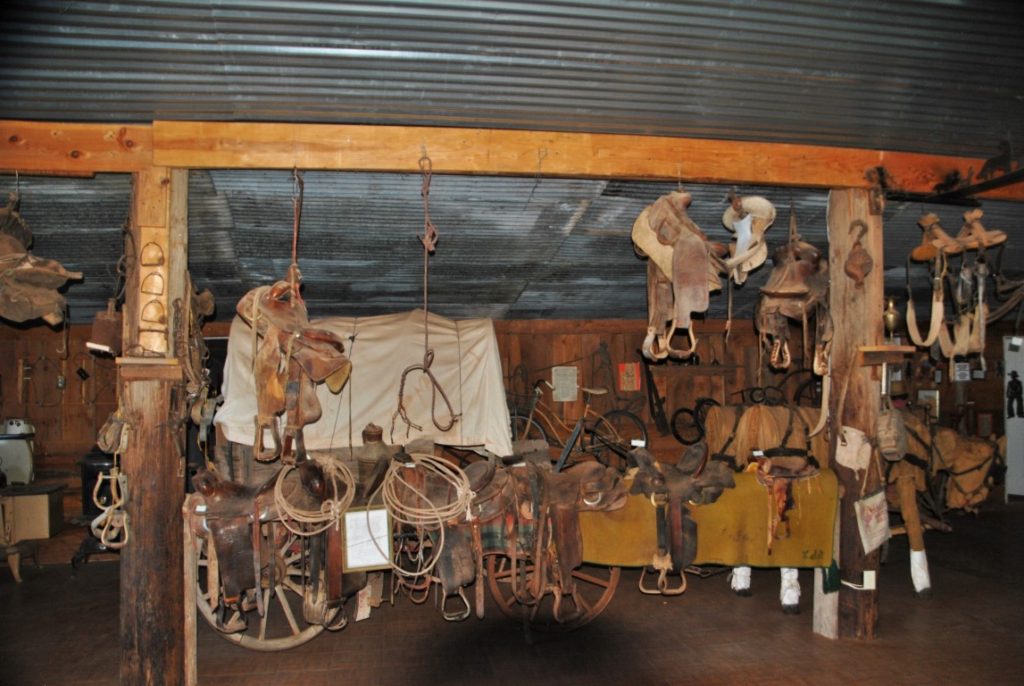 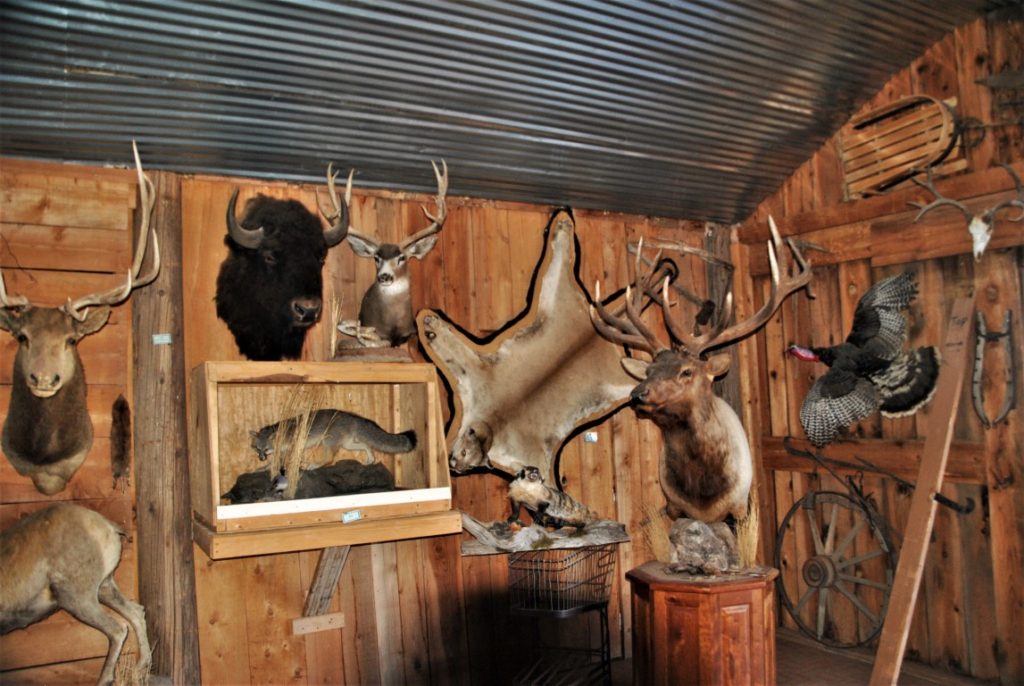 Nearly all of the native american artifacts had been found on the ranch property, most by Mr.  Baird himself!  Here are just a few pictures from the many cases of artifacts on display. 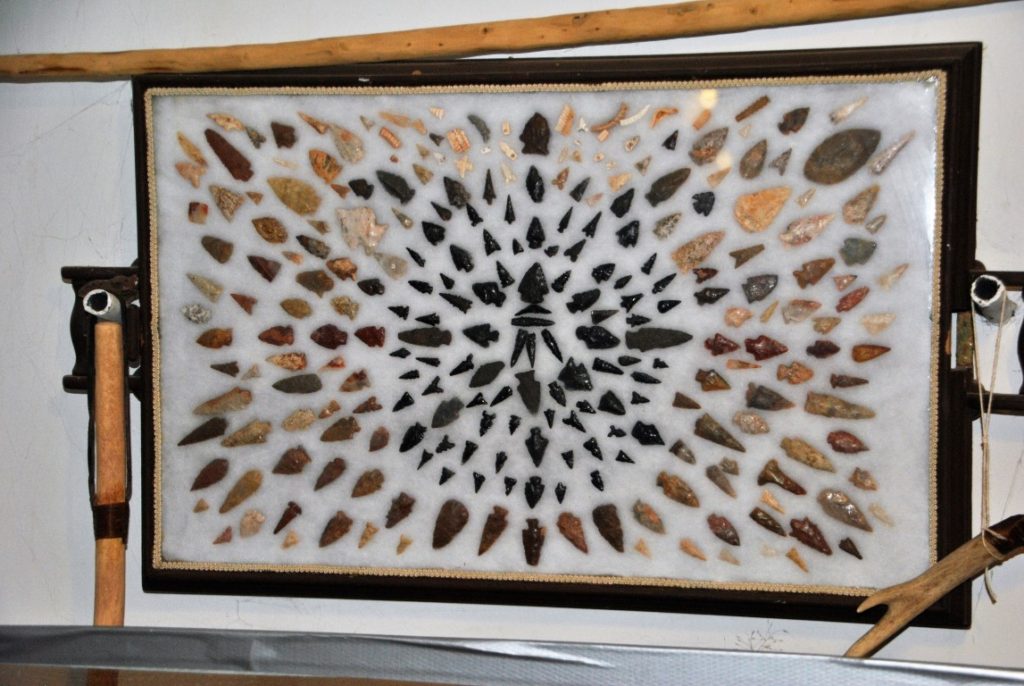 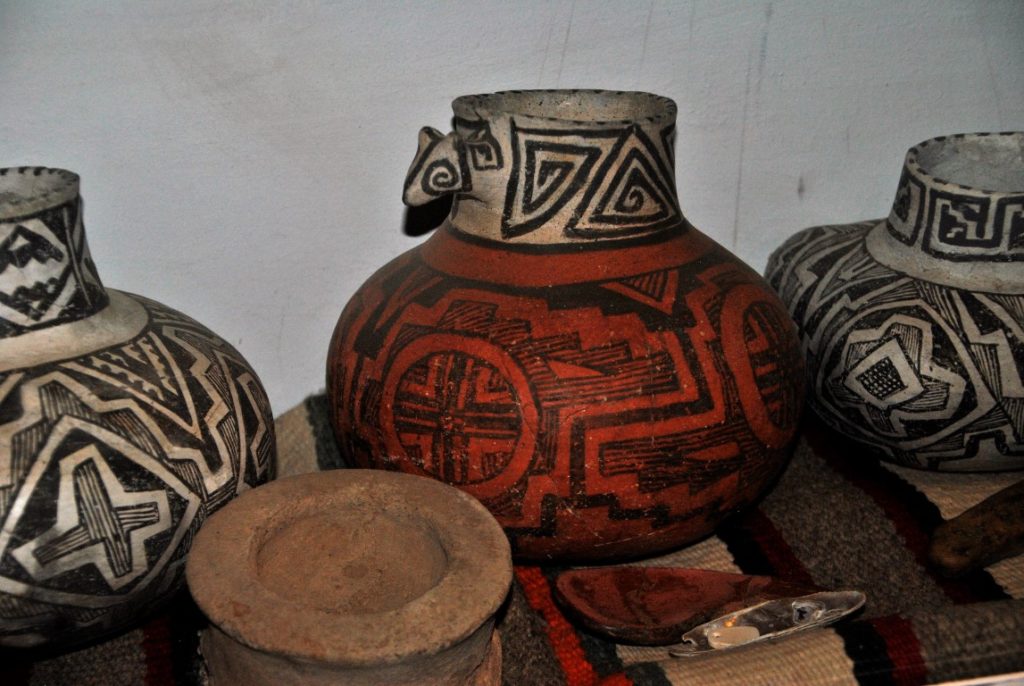 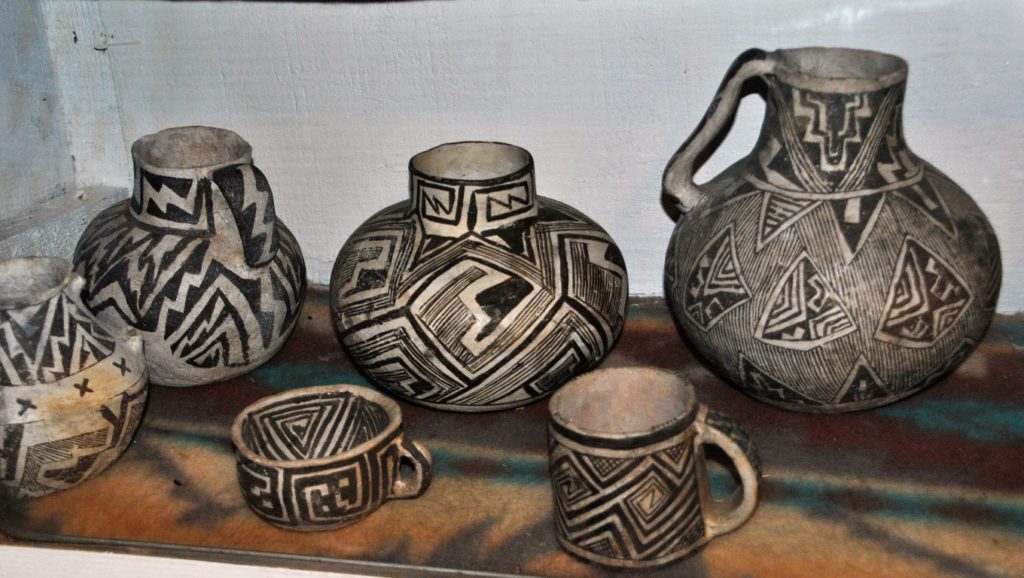 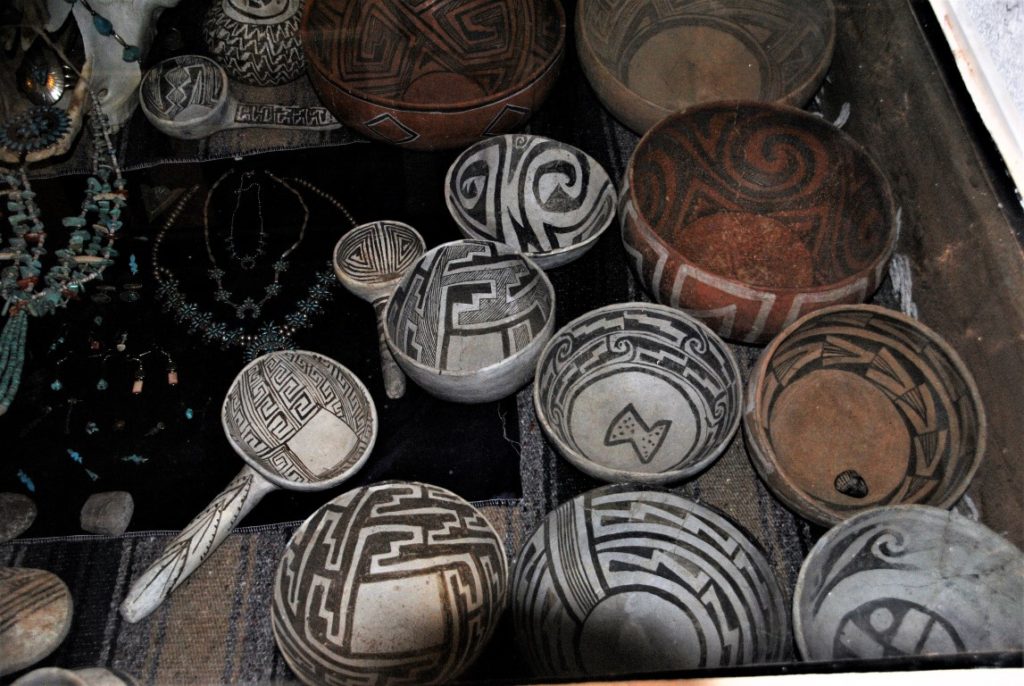 After viewing the artifacts at the main ranch, we each climbed into our vehicles and followed Brantley & his dog in his pick-up truck out across the ranch. 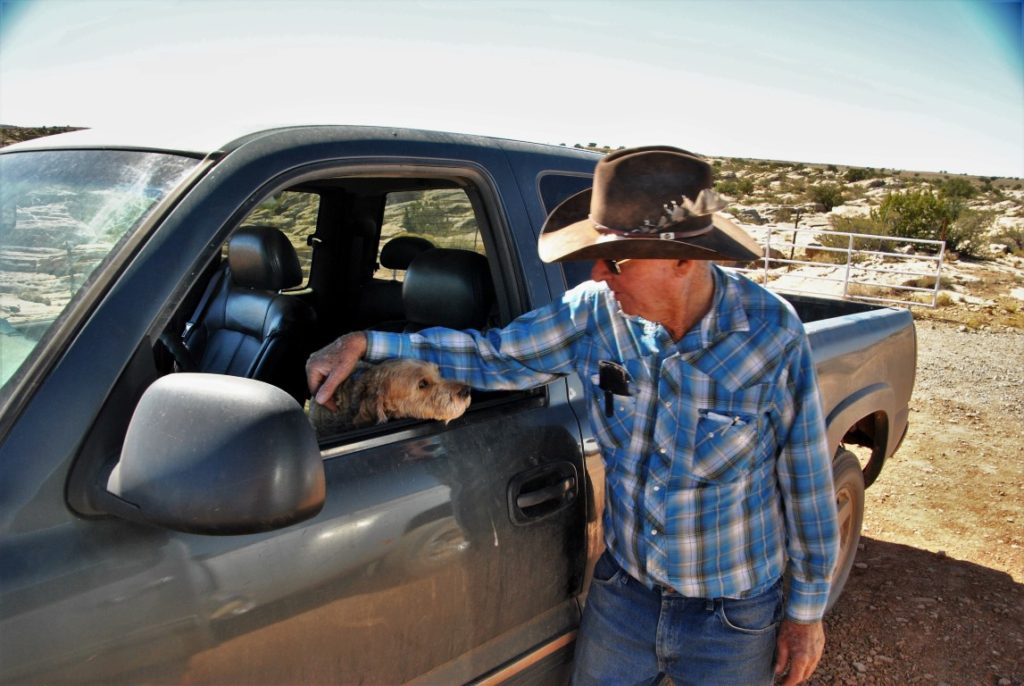 First we visited the ruins of a dwelling and a Kiva, built by the pre-puebloan (Anasazi) people about 1200 AD.  There were ceramic sherds around the area.  Mr. Baird had built a protective structure over these ruins to protect them from the elements. 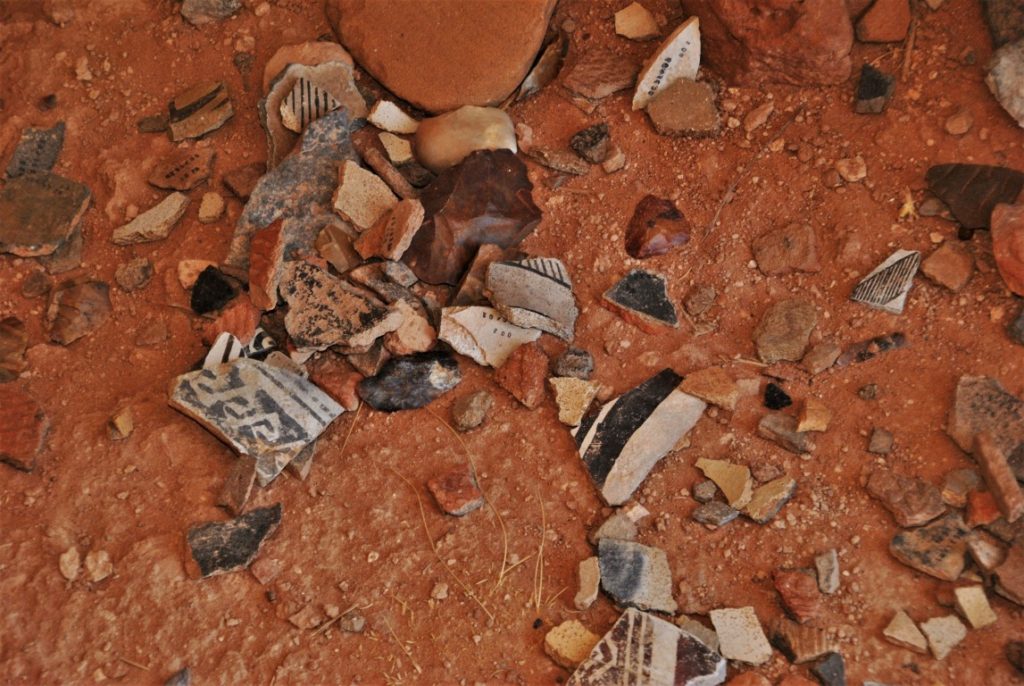 Then we visited a small abandoned Navajo village with men’s and women’s hogans and a sweat lodge.

Then we drove to the Petroglyph Canyon.  Archaeological records indicate that people have been passing through the area for 13,000 years. Hunting and gathering groups, semi nomadic farmers, and later sedentary farmers have left their mark on the land.  Over 3,000 petroglyphs have been found throughout the property, most of which are dated from between 5000 BC to 1400 AD.  (No, I didn’t take pictures of “every” one of the petroglyphs, but I tried!)  Here are a few: 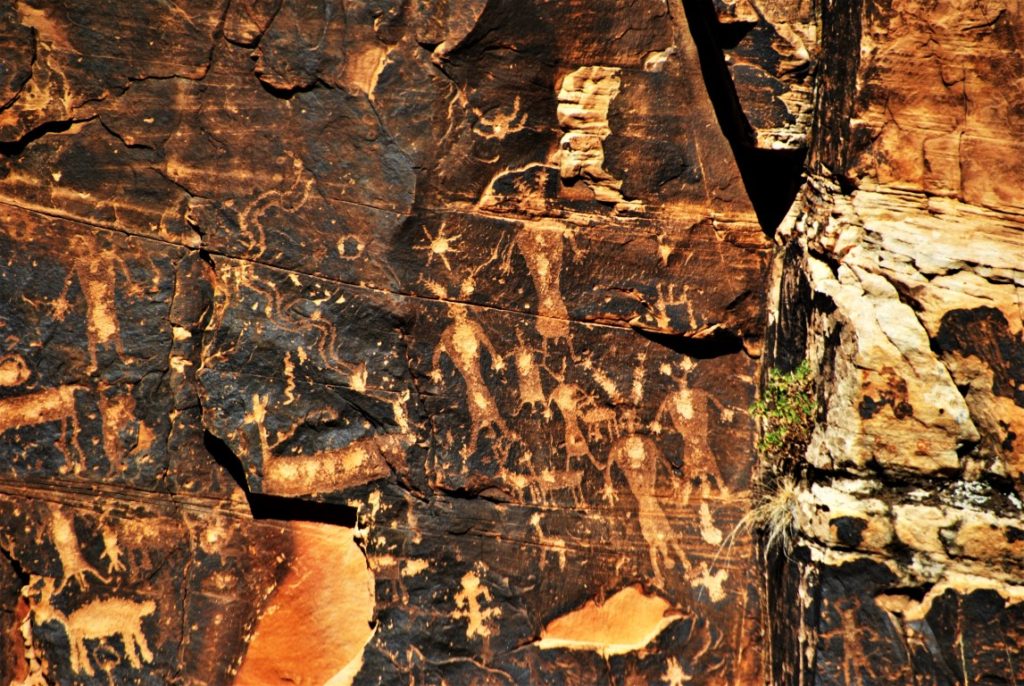 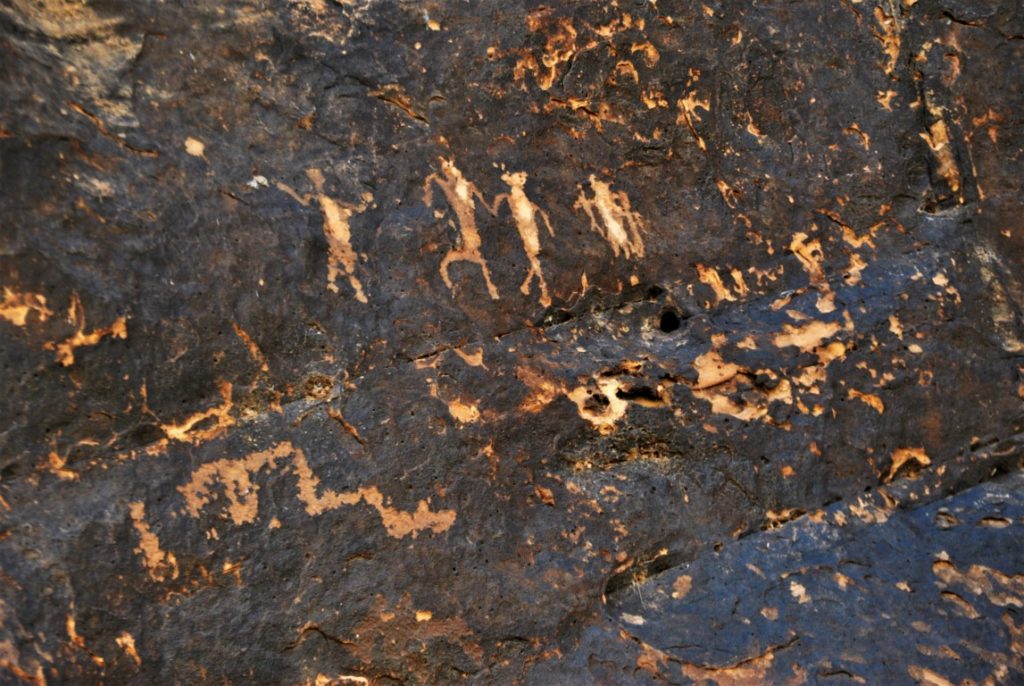 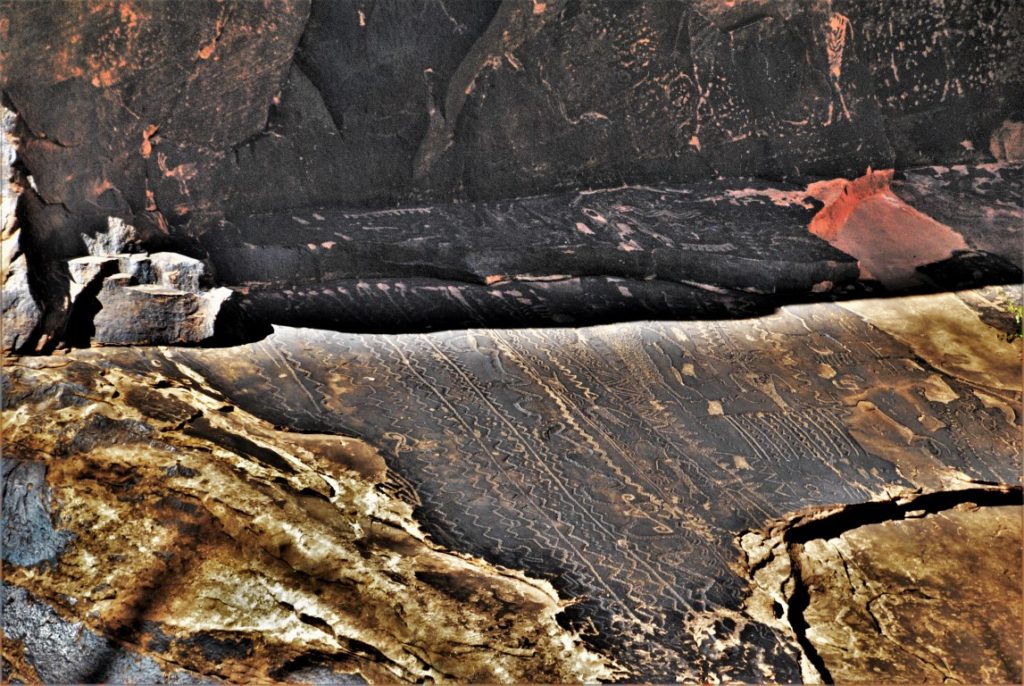 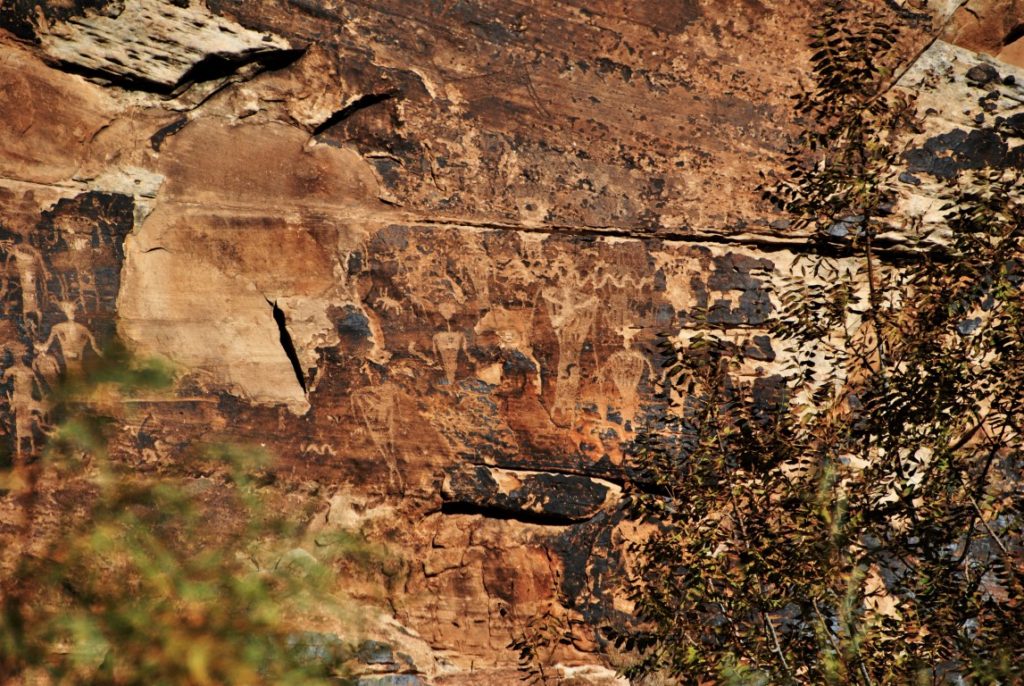 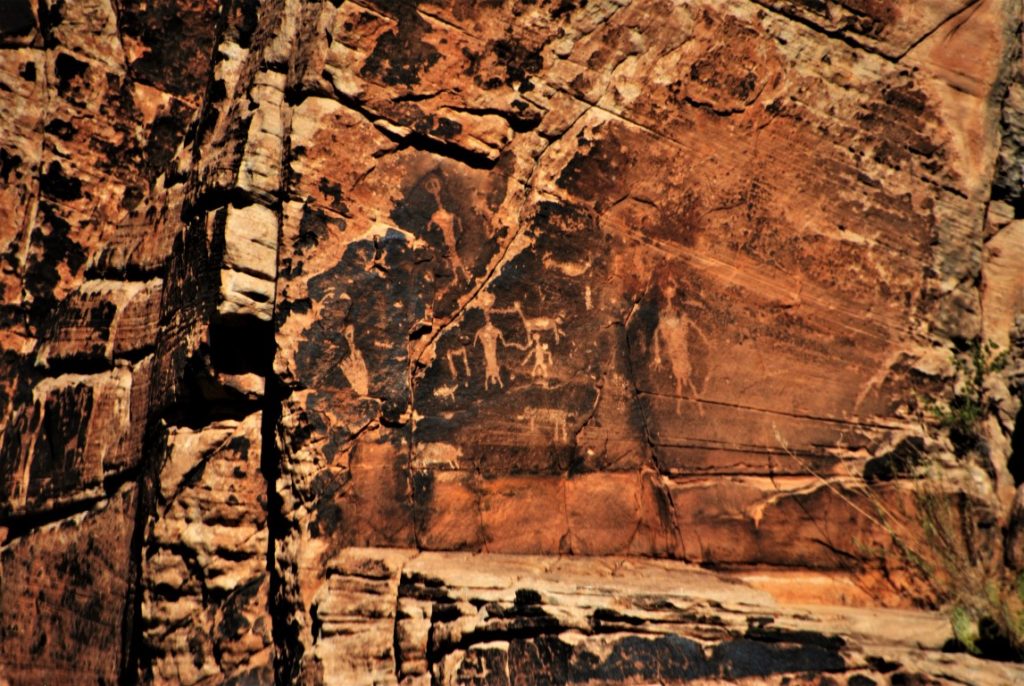 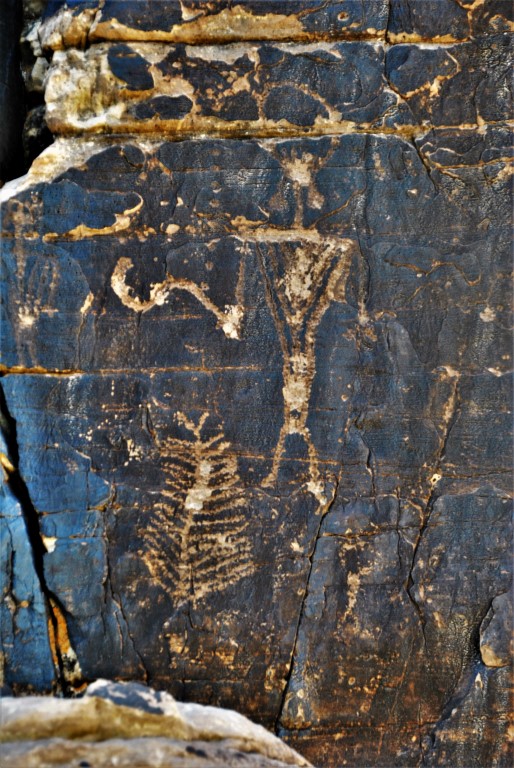 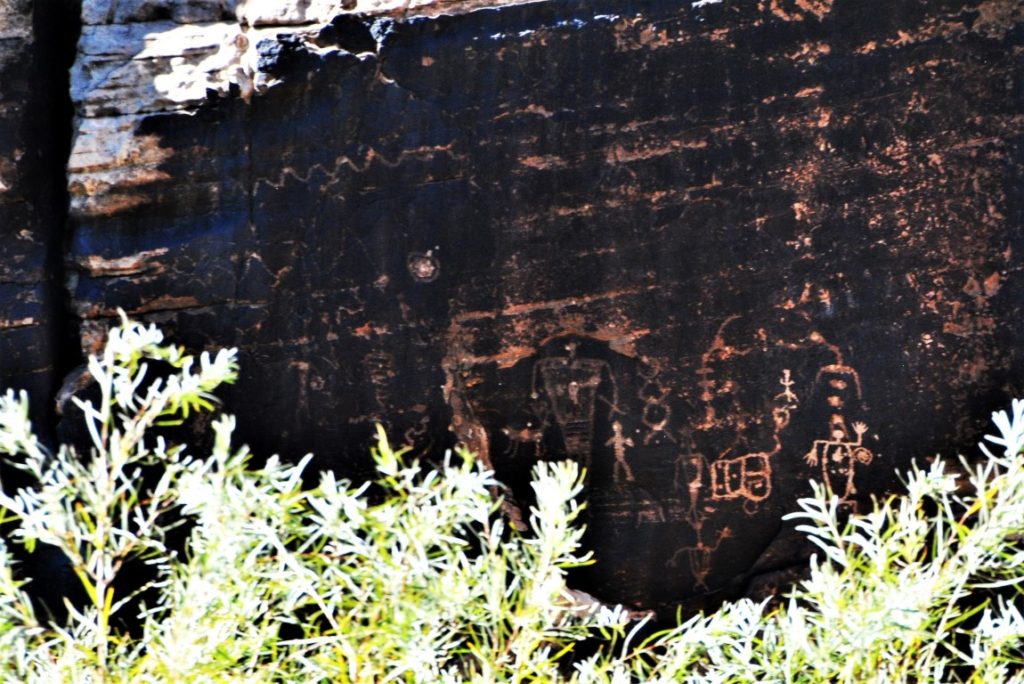 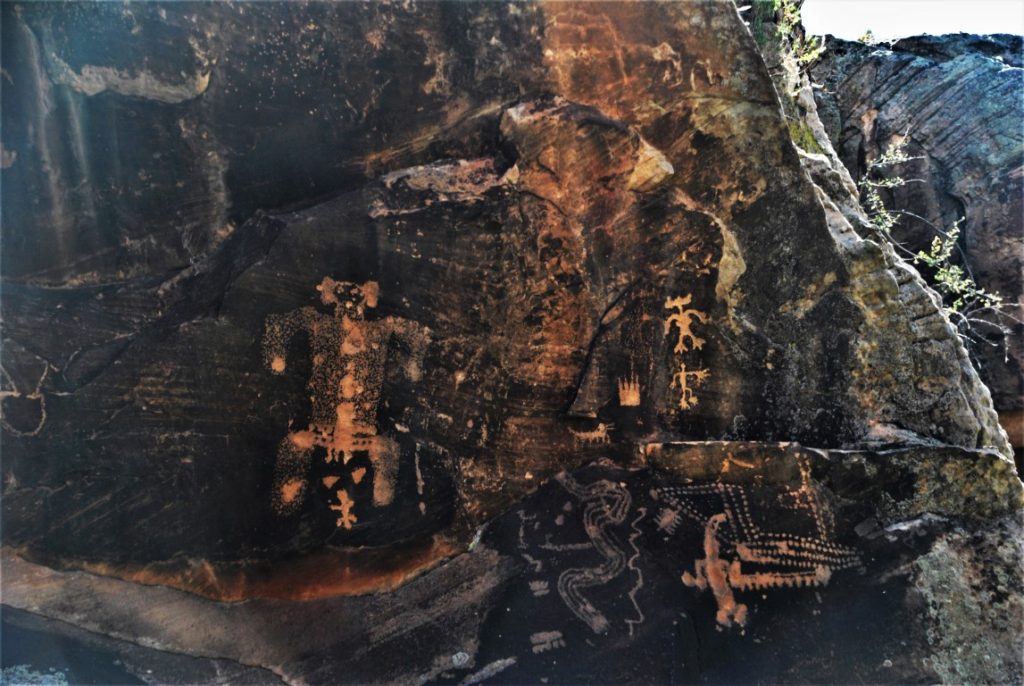 The canyon itself was beautiful!  It did require a fair climb into & out of the canyon! 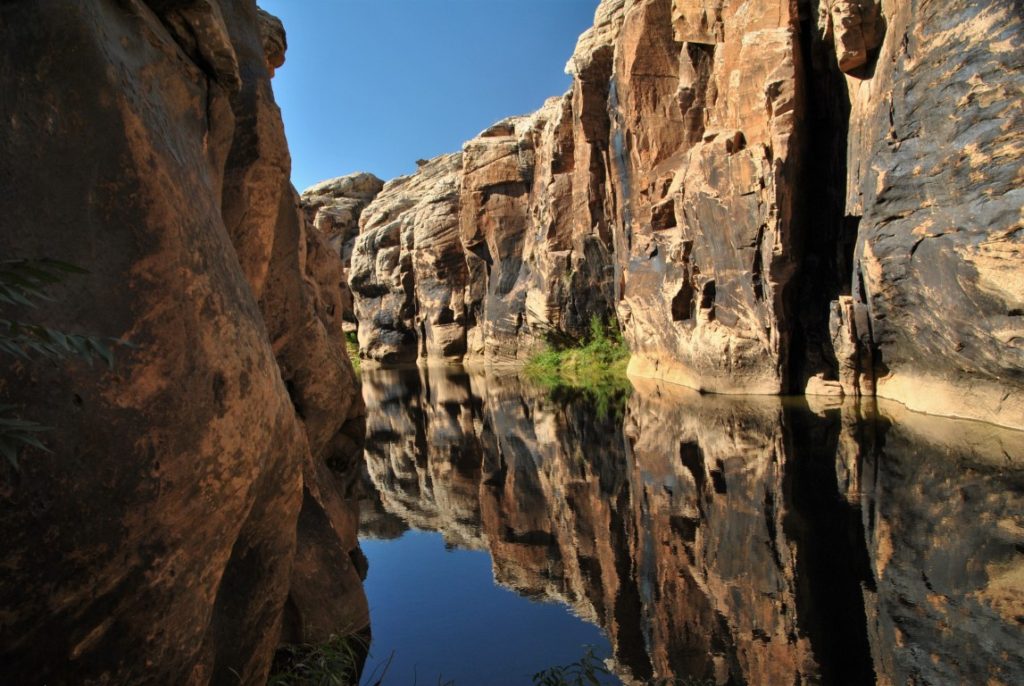 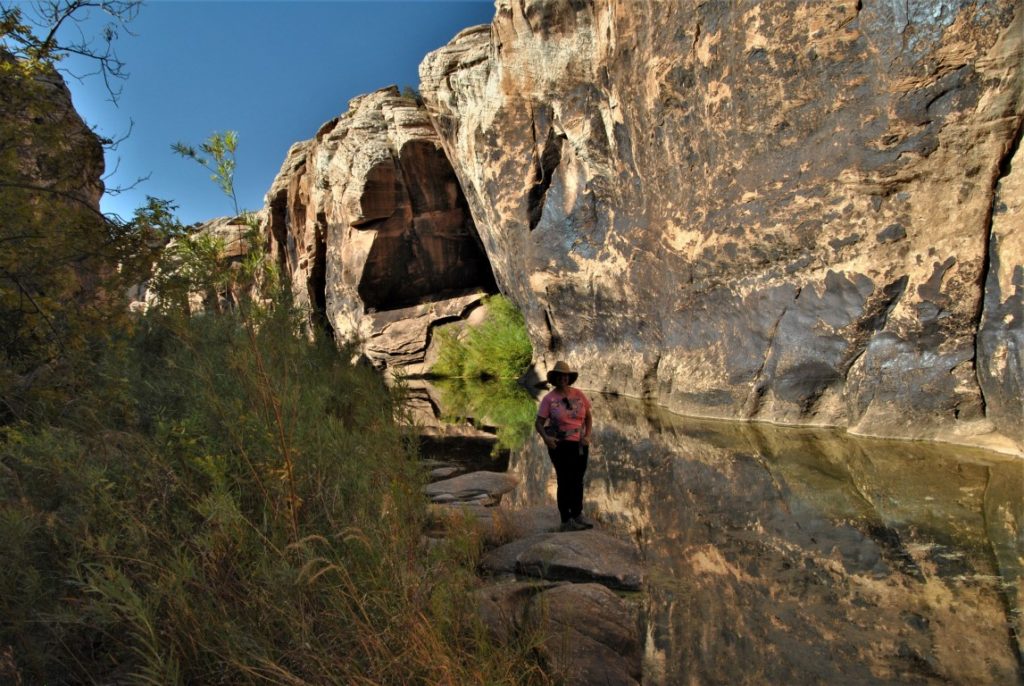 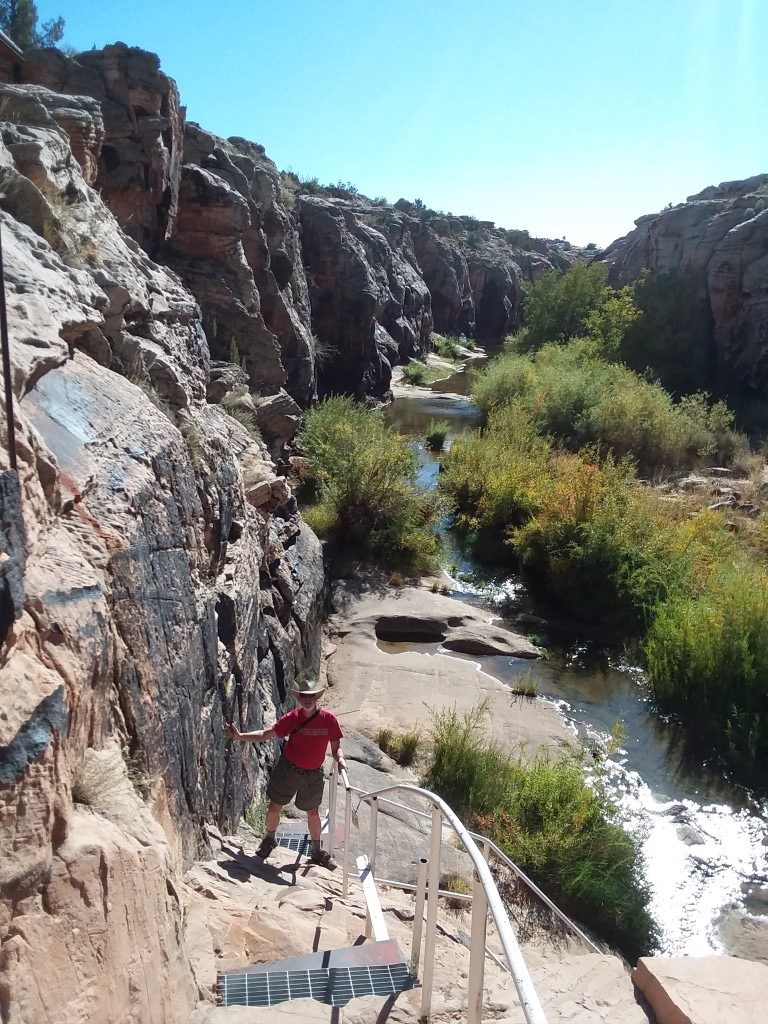