Grand Portage National Monument is a beautiful, and most interesting place. We are in the far northeastern tip of Minnesota — five miles from the Canadian border. 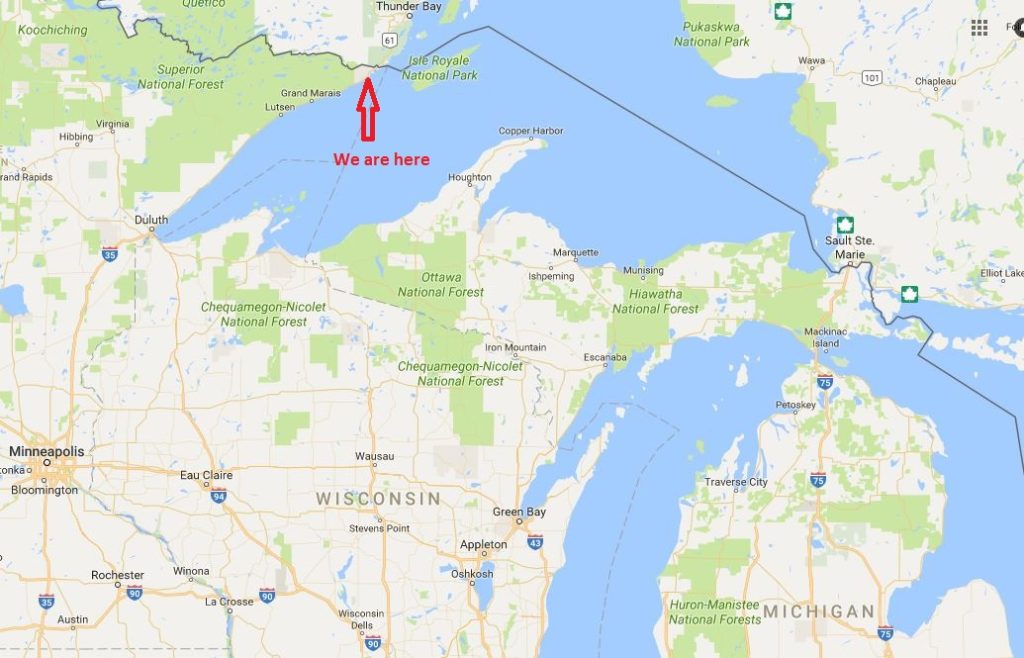 As we approached Grand Portage, we decided to stop to re-fuel in Grand Marais before going on to the little town of Grand Portage. I pulled into a filling station that was easy to get into, only to discover that the exit was completely blocked by cars patronizing the greenhouse next to the station. While pondering our dilemma another 5th wheel RV driver walked up to us saying, “I want to see how you get out of here before I try to pull in!” Fortunately two cars pulled out from in front of us, and I had an opening that I could “just” thread the truck and trailer through — and a lady came out of a store on the opposite side of the street and moved her car — so we cleared the various obstacles by at least a half-inch!

As we drove away Judith commented, “Wouldn’t it be funny if those folks were going to volunteer at Grand Portage?”

When we arrived at the National Monument and were shown to our site in the Volunteer Village.  We found that our friends Rachel and Steve had arrived earlier that day. We also met one of the other couples, Doyle and Paula, who had arrived several days earlier. Then, you guessed it, the folks from the filling station pulled in right behind us and we met Paul and Ginger! Each of the other volunteer couples have a dog, so we will certainly be able to get our “puppy fix” on a regular basis. 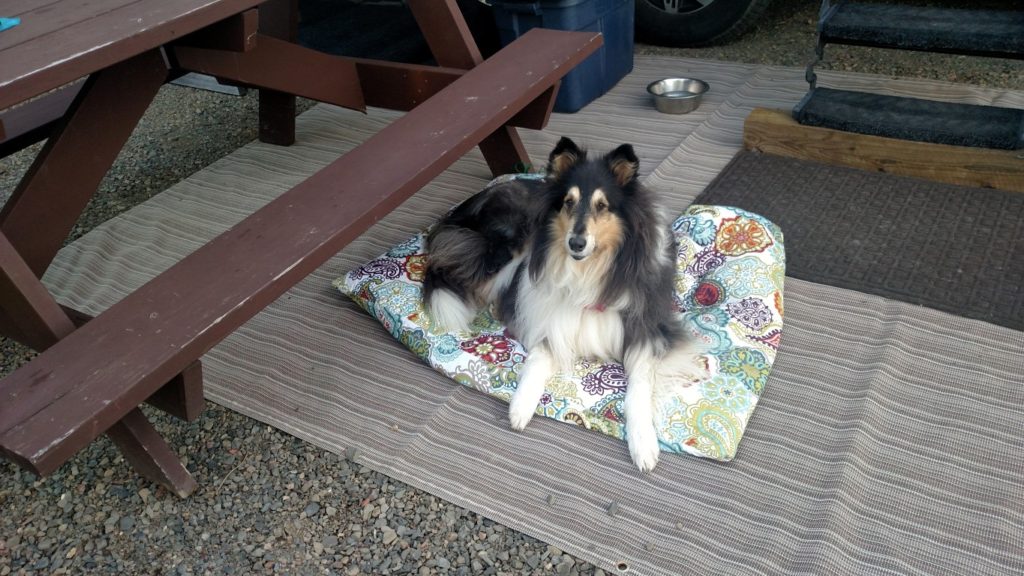 On our first full day at Grand Portage, we joined Steve and Rachel, Doyle and Paula, to visit the National Monument as tourists (almost incognito — except Judith kept blurting out, “We are the new volunteers!”) The site is beautiful and the staff very knowledgeable. We began our training right after Memorial Day.

We had been told that the closest and best shopping was in Thunder Bay, Ontario. So, off we went to stock up on groceries, etc.  As we crossed into Canada, the border agent commented, “Mark, Did you know that your passport has expired?” Of course, I didn’t, but he didn’t make a big deal of it and we went on to find a Walmart in Thunder Bay.

All was well until our return when we reached U.S. Customs and Border Patrol…  What we learned there as we attempted to return to the U.S. is that any fruits, vegetables, meats, etc. that did not originate in the U.S. or Canada cannot be brought back into the U.S. — good-bye peppers & tomatoes. Also, any potted plants must carry a phytosanitary certificate from the country of origin showing that the plants meet APHIS entry requirements for the United States. Our Walmart tomato and flower plants did not! So we had to go BACK into Canada, and throw them away on the Canadian side of the border before coming back to U.S. Customs again! Oh! and we learned that I would not be able to use my expired passport again, and Judith’s was invalid because she had not signed hers!  We “flunked” border crossing! 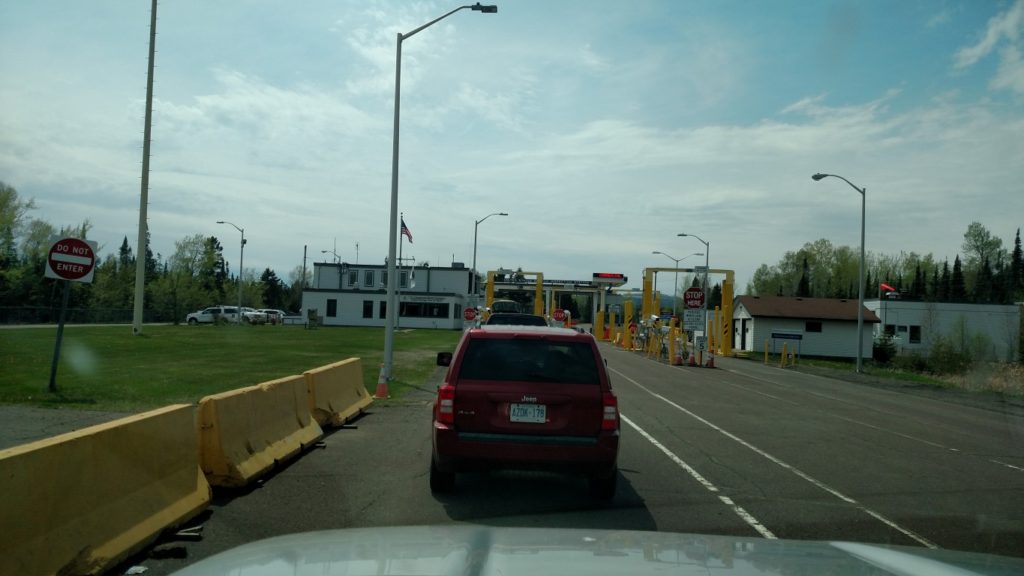 We have decided that we will do “most” of our shopping at the little tourist down, 33 miles down the coast — Grand Maris.  It is such a cute place! 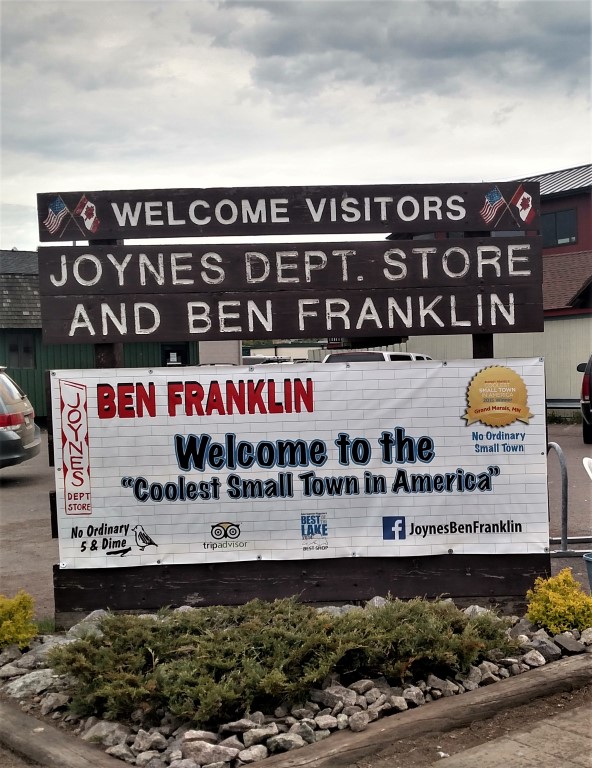 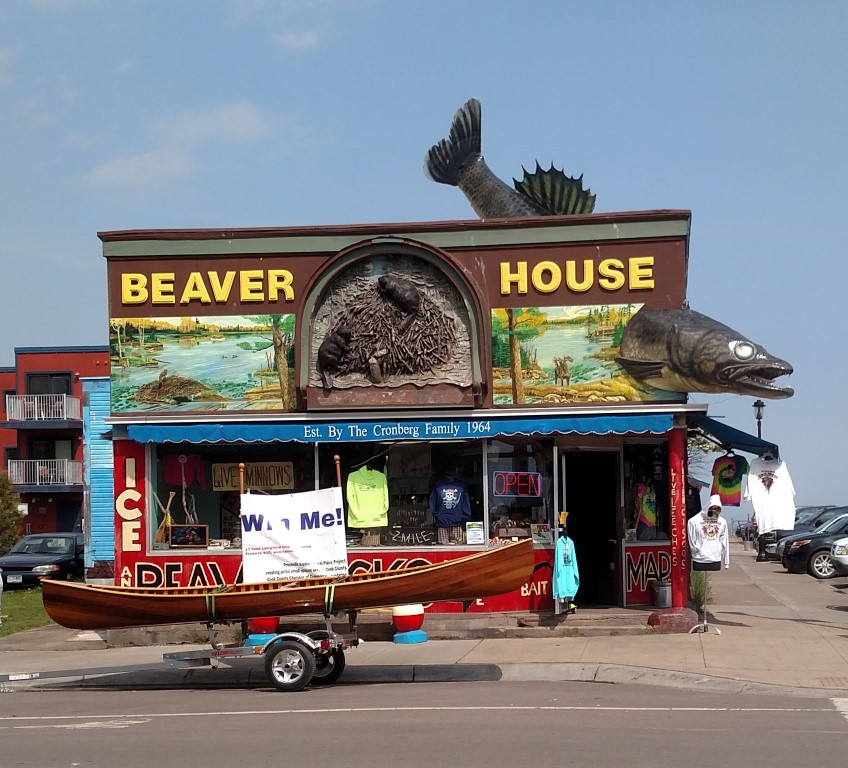 The Monument and surrounding area is beautiful.  And it’s history is amazing.

We have just finished two weeks of classroom training and we still have a couple weeks of additional training as we “shadow” experienced interpreters before we are fully trained.  AND, we each need to prepare our own 30 minute program for presentation to visitors — we have books and papers everywhere!  It feels like our term paper is due — and we don’t have it ready yet! 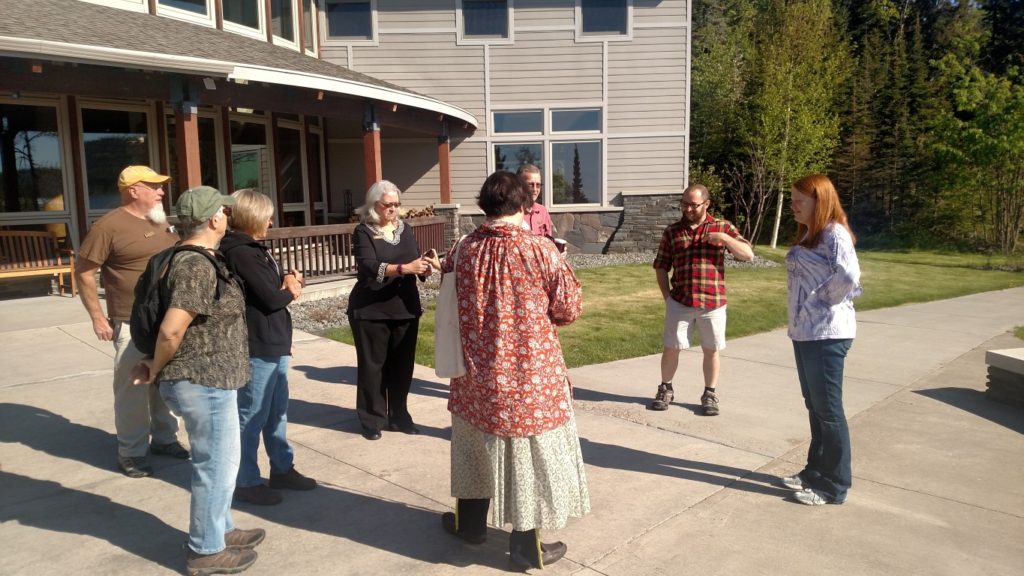 The Monument has an archive of over 100,000 artifacts and a fantastic archive area.  Most of the items are from the 1700’s and very early 1800’s, but some are more than 9,000 years old — including one of the earliest copper spear-points found anywhere in the world! 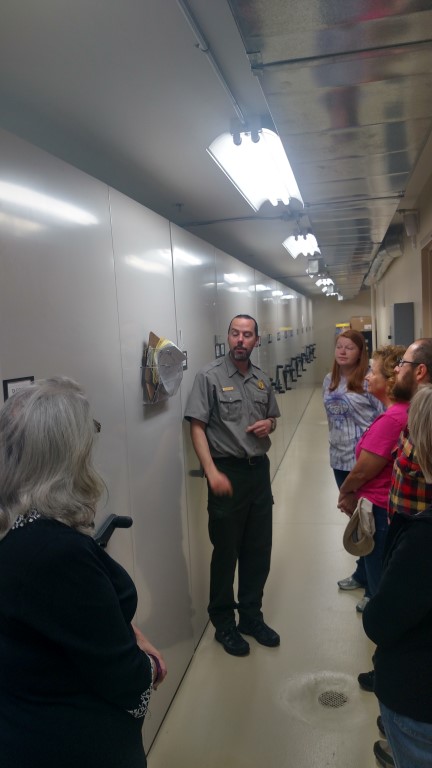 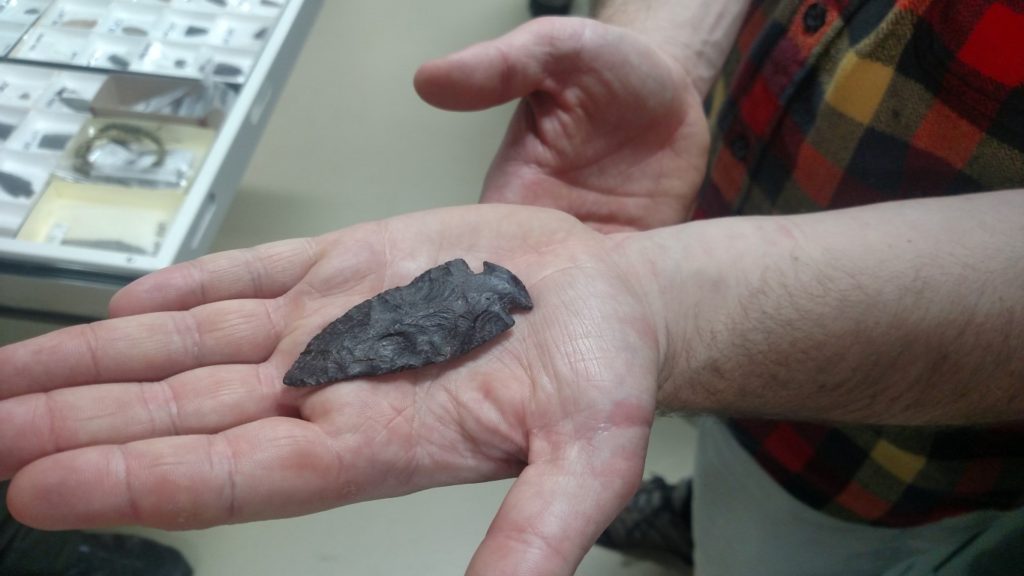 Voyagers from Montreal would travel to Grand Portage carrying 8,000 pounds of supplies in a 16 person canoe.  To gain an appreciation of the effort involved, we took a modern (fiberglass) replica out past the entrance to  the bay and over to a tree along the bank of Lake Superior that is several hundred years old, and is sacred to the local people. 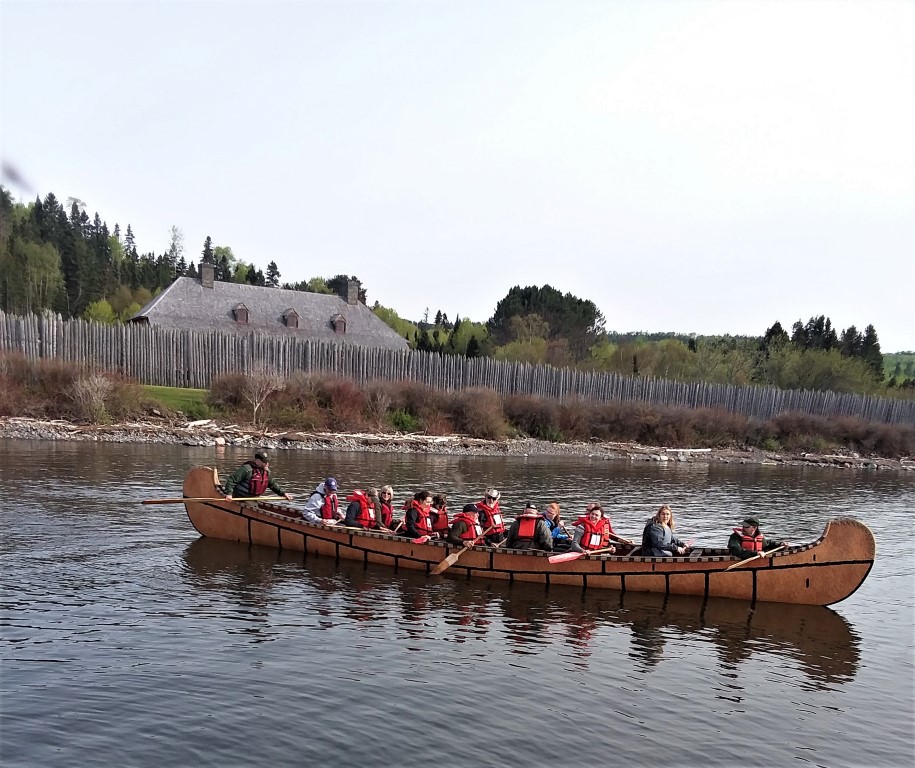 Unfortunately, as a part of the training we were going to hike part of the Grand Portage.  The ground was wet and slippery, rocks and roots were everywhere, and Judith tripped.  When she landed, she “knew”!  She had once again dislocated her elbow.

Back down the long, bumpy road to the highway; down the 33 mile drive to Grand Marais to the nearest hospital. 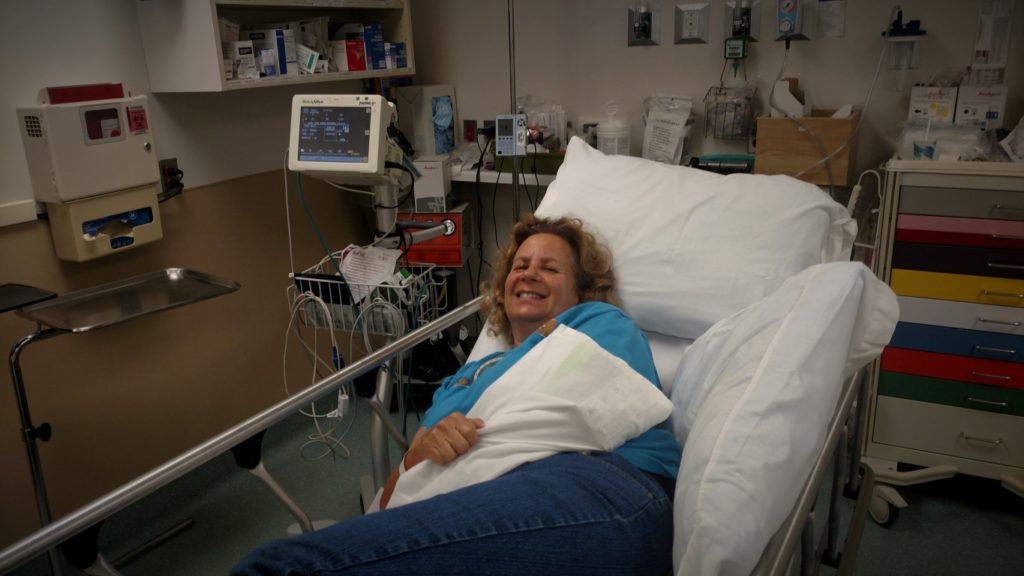 All of the interpretive staff dresses in 18th century attire.  Here is one of the amazing interpreters playing a bellows bagpipe for visitors in the Great Hall. 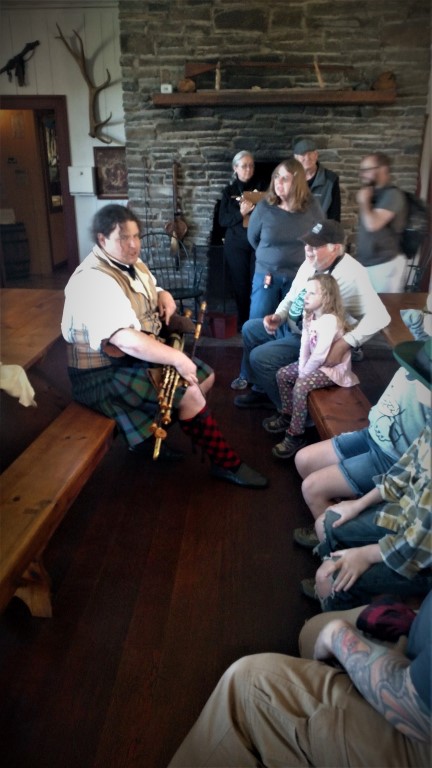 We will have pictures of us in our costumes next time…