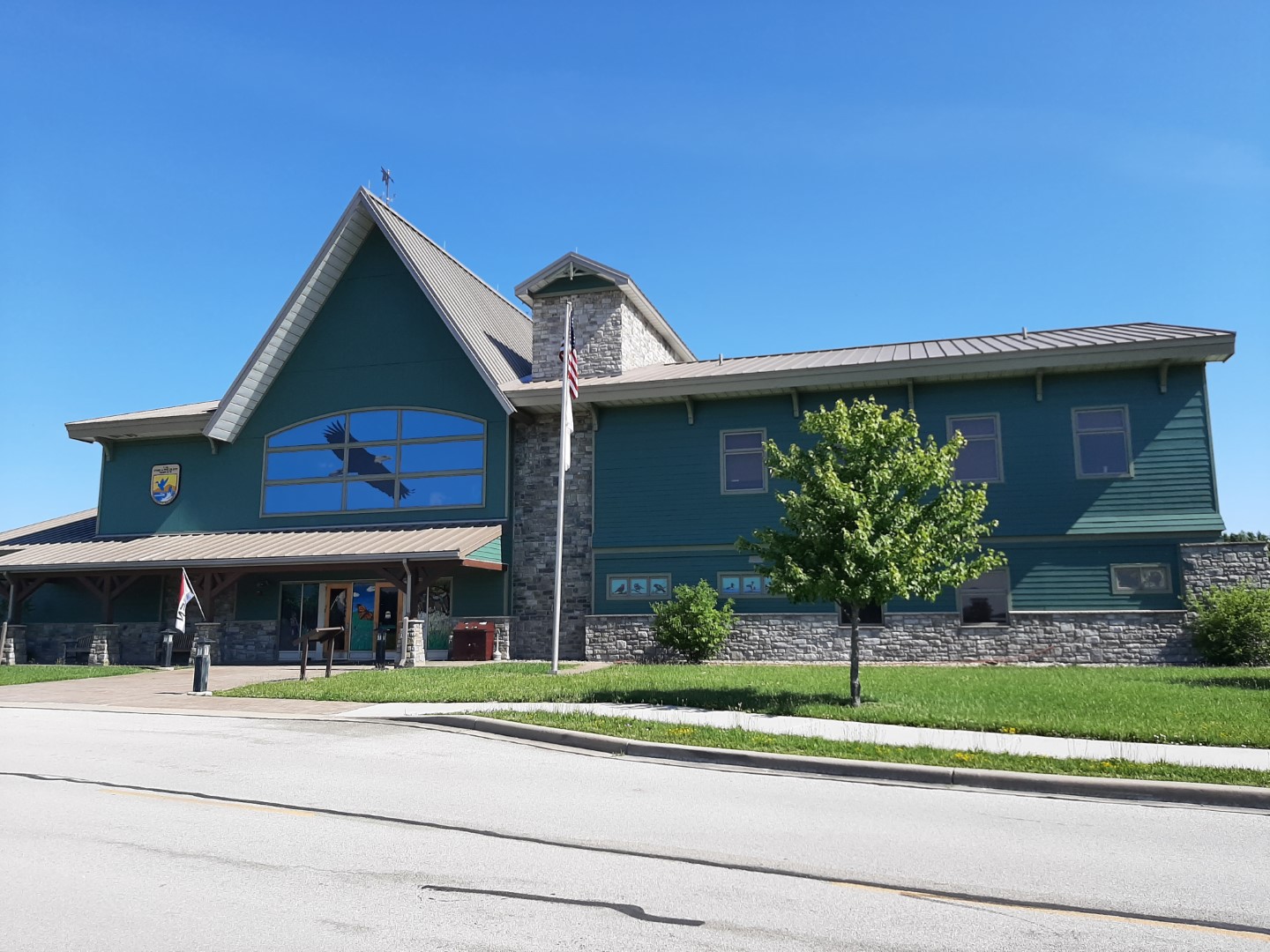 We arrived at Ottawa National Wildlife Refuge (NWR) the last day of March. We had not been in Ohio in the early Spring for many years; it is COLD in Ohio that time of the year! And that led to a few complications when we first arrived: the water at the site had not yet been turned on for the season, which also meant that the water had not been tested for safety — turn the water on, take a sample, send the sample to the state lab, wait, wait, wait, wait — wait three weeks, the water is safe! Hurray!

Fortunately, we have a 40 gallon potable water bladder that allowed us to get city water at the Visitor’s Center and carry it back to the trailer during the three weeks that we waited for the results. Unfortunately, we needed to do that about twice a week — or forego showers and such.

The management and staff of the Refuge have been tremendously welcoming. One of the first days we were here the Volunteer Services Manager, Rebecca, was going to a planning meeting for an upcoming event and she invited us to join her to meet many of the Friends of Ottawa NWR. We met at a delightful little winery nearby, The Mockingbird on Mill Road – Wine Cafe. The ambiance was delightful, as were the people. 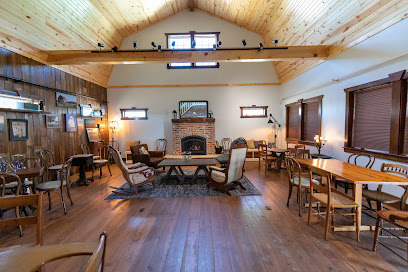 One of our first days at the Refuge there were two Bald Eagles in the trees about 50 yards behind our trailer, one was a juvenile and the other was an adult. As I took a picture of the adult, a small flock of Sandhill Cranes flew through… Who knew there were Sandhill Cranes in Ohio? 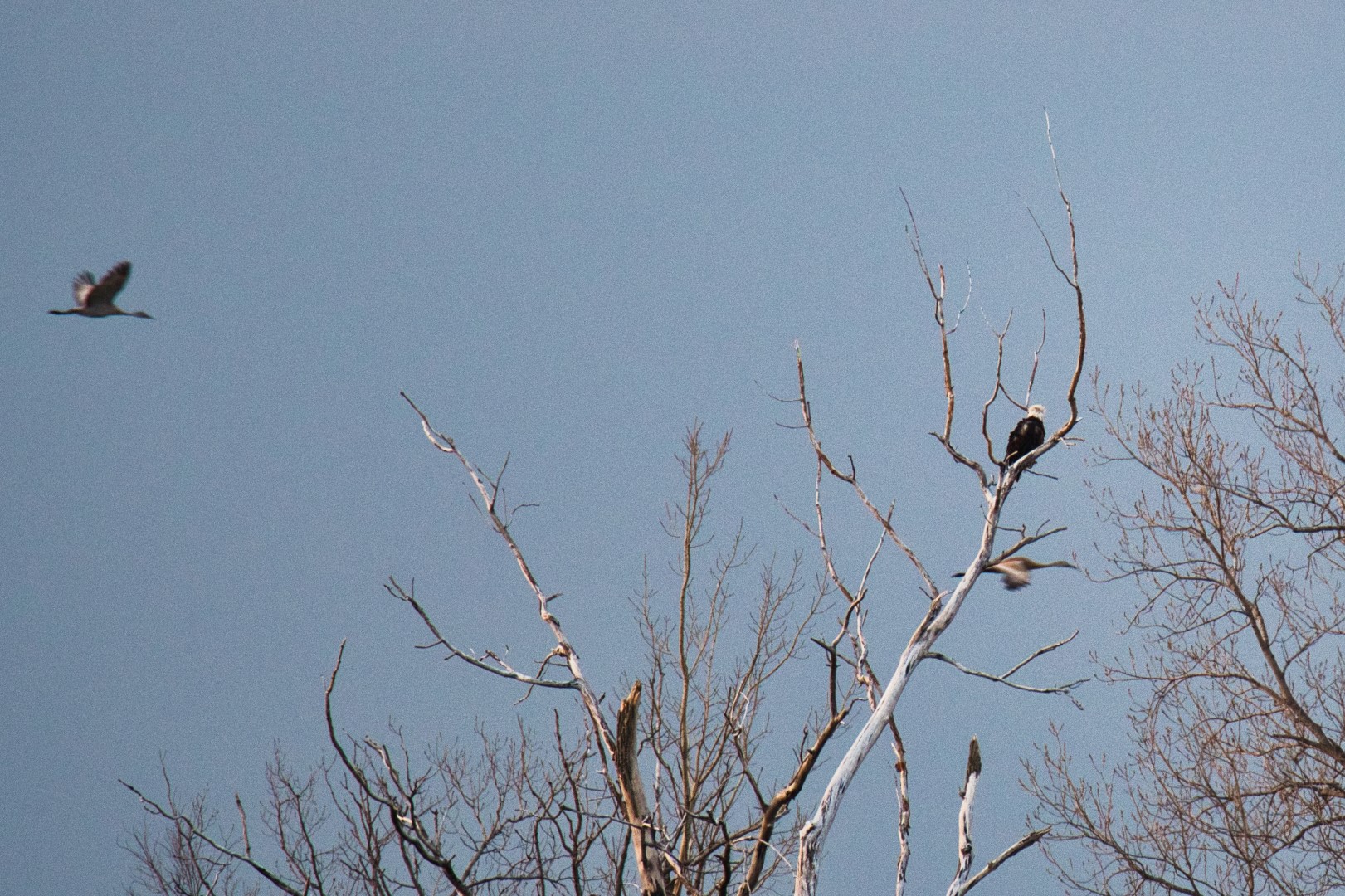 The Refuge and the area around it is the best place in Ohio to see Bald Eagles. The refuge has nine eagle nests! 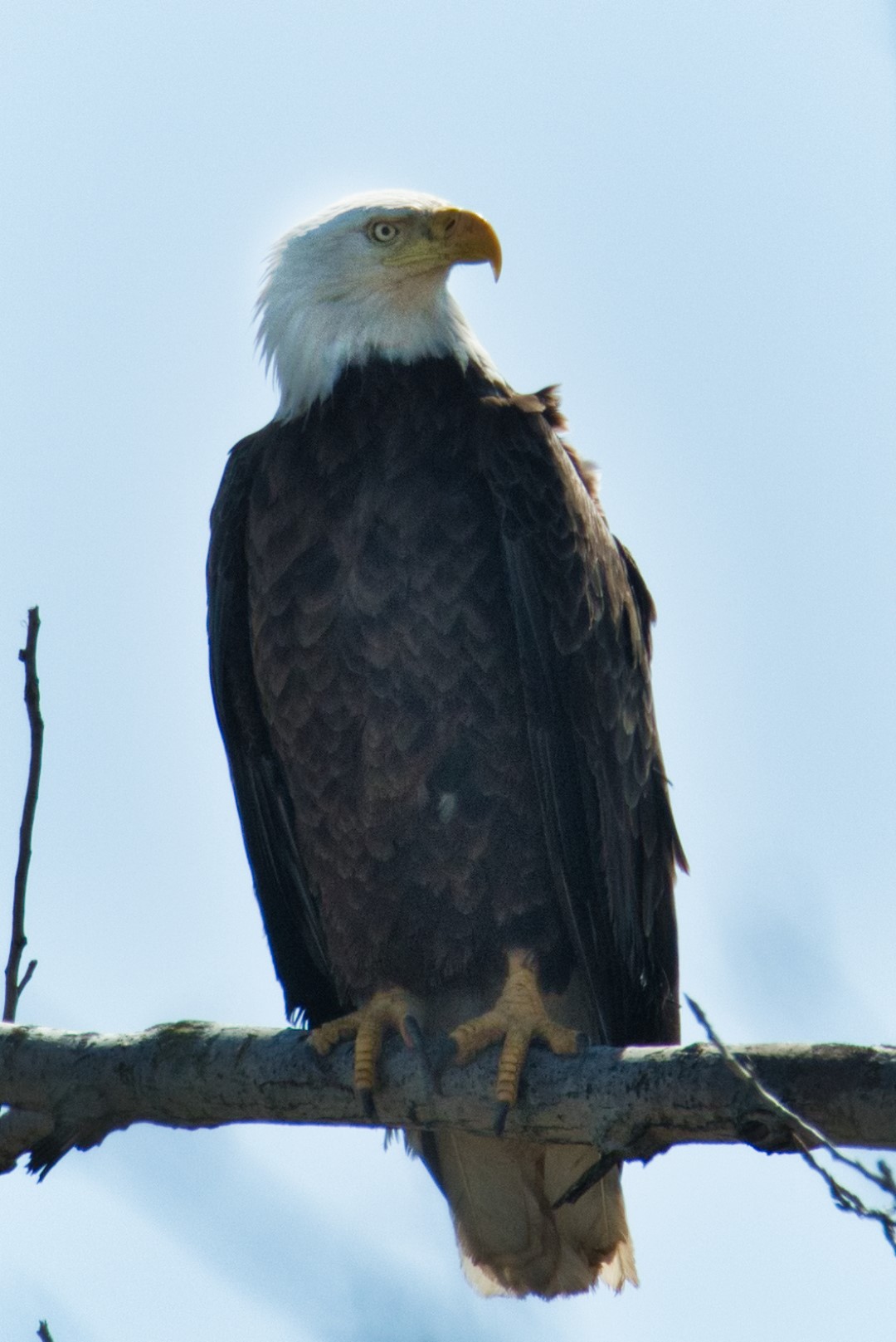 Our long time friends, Jerry and Ellen, came to visit us.  They are as interested in history as we are, so we visited the Rutherford B. Hayes Home (Spiegel Grove) and Presidential Library in nearby Fremont, OH.

President Hayes was the first retiring president to establish a Presidential Library. His home and the associated museum were very interesting. 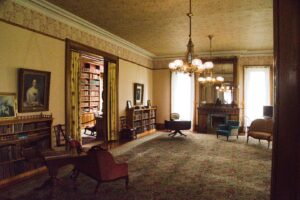 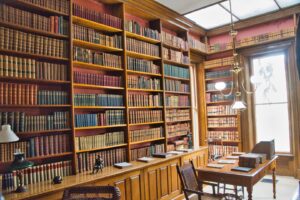 When the White House grounds were being renovated for better access to motorized vehicles, the Presidential Library requested the gates that were removed from the West gate, and with an act of Congress, they were donated and installed at the Hayes Library. 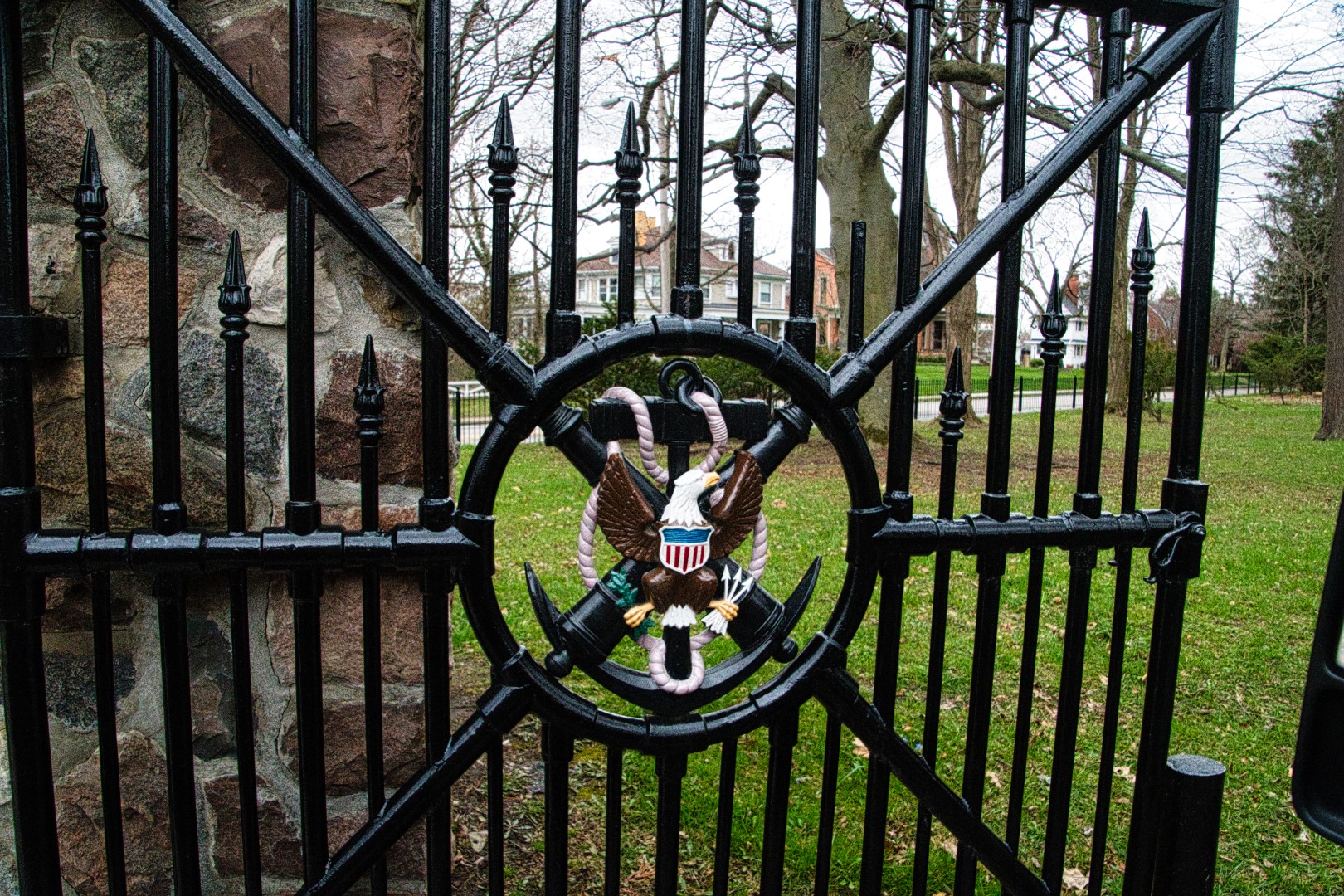 We also visited Fort Meigs, a key fort and battle site protecting Ohio from the British during the War of 1812. Our docent was very informative and extremely knowledgeable.

The Star Spangled Banner (fifteen stars and fifteen stripes) was our national flag during that war, and still flies over Fort Meigs.  That flag continued to be the National Flag until 1818 when a flag with 20 stars (for the 20 states) and 13 stripes (for the 13 colonies) was adopted. Five states were admitted to the Union after the Star Spangled Banner was adopted in 1794 (Tennessee, Ohio, Louisiana, Indiana, & Mississippi) before the adoption of the new flag. 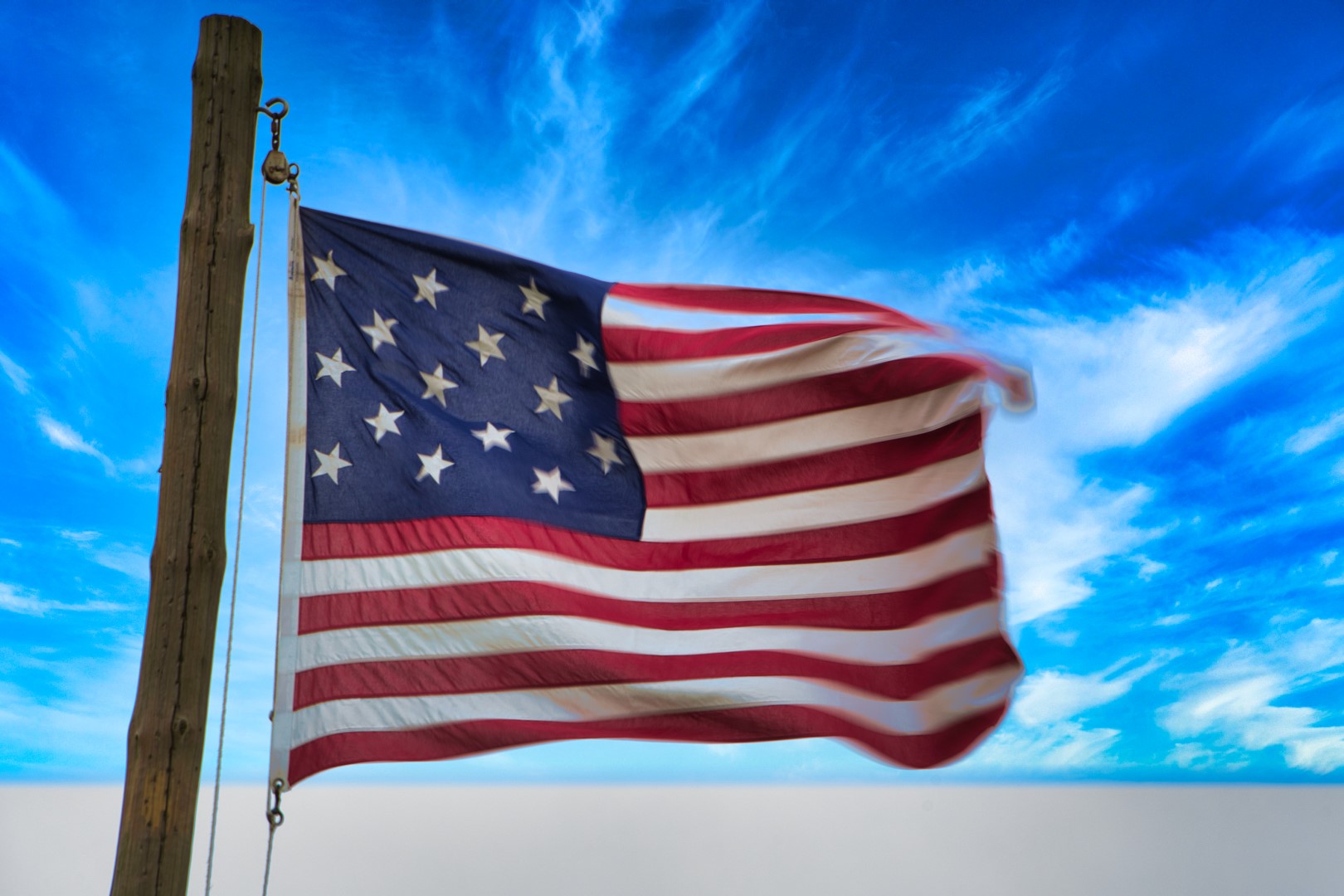 Ottawa NWR and Magee Marsh State Wildlife Area stand shoulder to shoulder on the shore of Lake Erie. Together they form one of the “10 Best Birding Sites” in the country. Small birds, especially warblers who nest in the Canadian forests, accumulate on their journey north, resting and feeding before their rigorous trip across Lake Erie. Dedicated visitors may see over 100 species of birds in a single day during the spring migration! 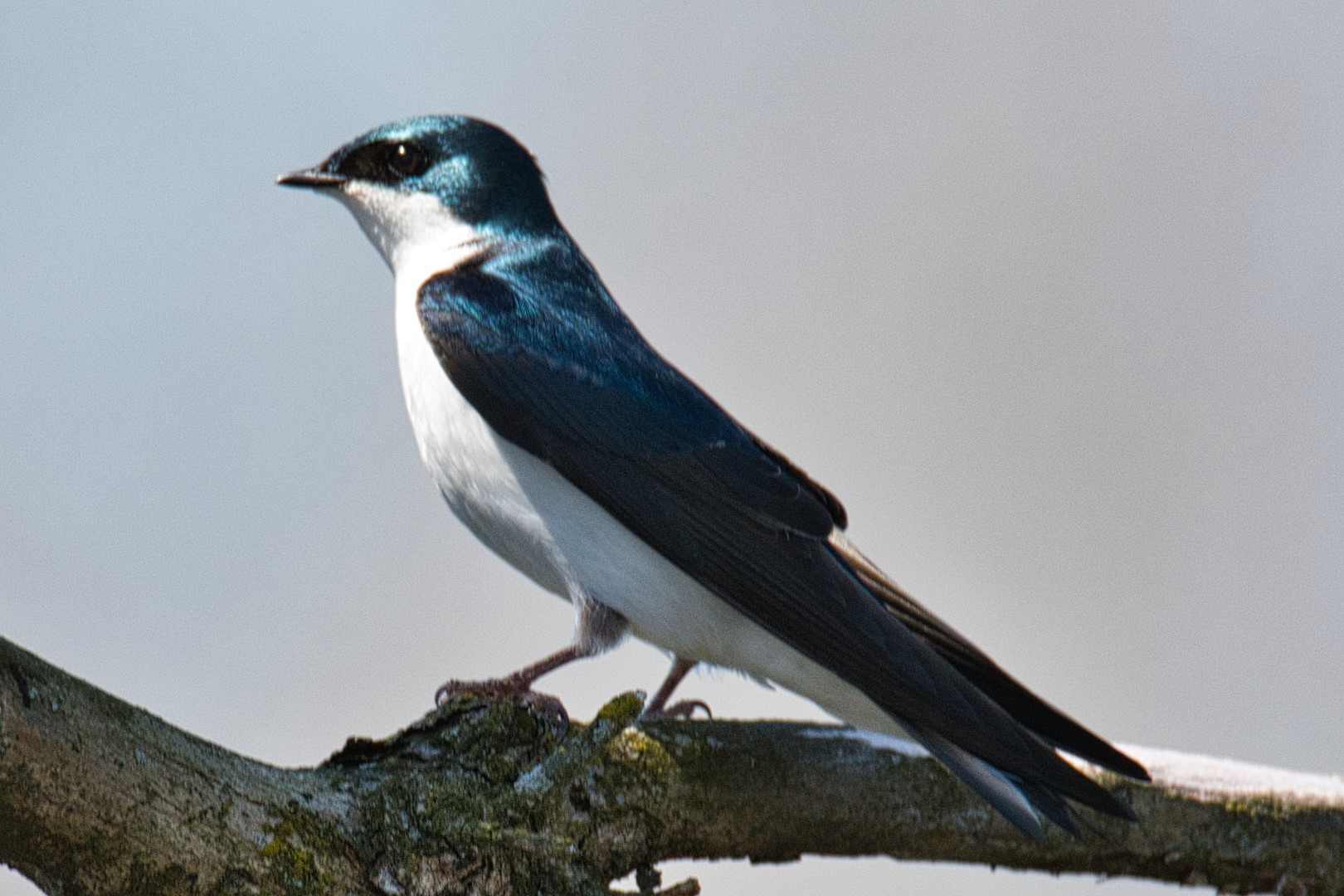 Tree SwallowA single drive around Ottawa’s Wildlife Drive allowed us to see 18 individual eagles and a variety of other birds. The refuge has nine eagle nests and the area has the highest population of eagles in Ohio.

Our camp site is right along the refuge, so we see a fair amount of wildlife from right at home.

Other birds we have seen on the Refuge:

We had a lovely day visiting Marblehead Lighthouse with lunch on the beach.

But, perhaps our greatest joy has been meeting and getting to know the wonderful staff and interns here at Ottawa NWR.

Other staff and volunteers who we met and came to know (but we did not have picture) include Dominique, Mike, Alex, Logan, Lionel, Rebecca, Carl, and the refuge manager, Jason.

As a final treat, my old college roommate, Dave, his daughter (my god-daughter, Katie), and her two daughters came to visit the refuge. I neglected to take any pictures (“What?” you say? How is that possible?) but here is a pic I stole from Katie’s FB page of the girls with their father.  Unfortunately, her Mark had to work that day! 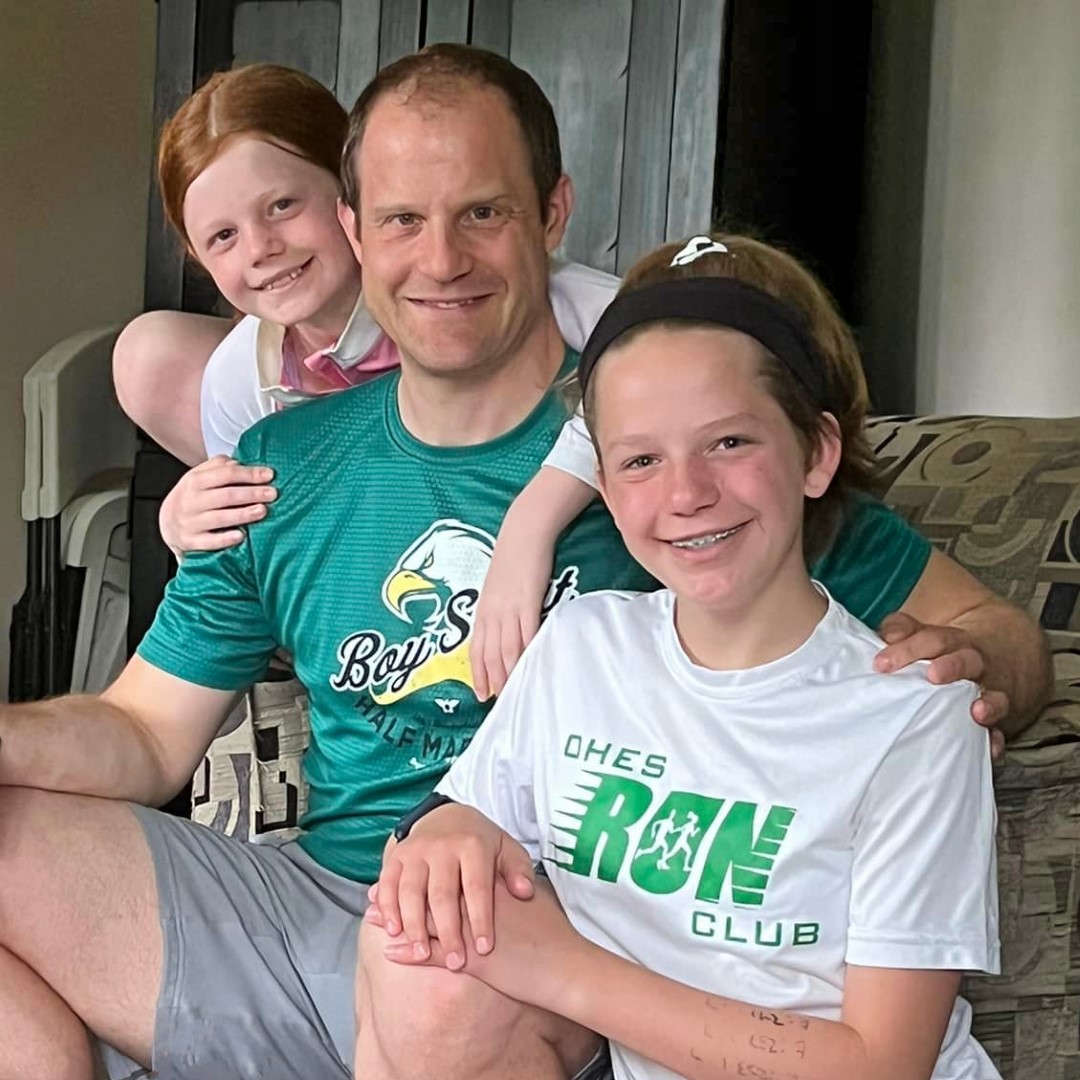 The end of our adventure at Ottawa NWR came following my experiencing a detached retina in my right eye. The staff was very supportive during our ‘adventure’. Wednesday AM, appointment with local ophthalmologist, “You have a 3 PM appointment at a retina specialist in Cleveland.” Rush home, get the cat and throw some clothes together. Let Michael know that we will be crashing with him. Thursday, eye surgery, 24 hours face down. Friday, follow up appointment, Tuesday second follow-up appointment – internal eye pressure high – get drops, Thursday eye pressure appointment – pressure is fine. Return to Refuge for final days before departure.

Of course, A) I cannot see out of that eye, and B) what I do see is blurry, wiggly-jiggly and is making me sea-sick! But this too shall pass. I am wearing an eye patch so that I don’t see the motion; it’s better than being nauseated all day! Michael will come on Tuesday to drive the rig back to his house for July, and Judith will drive his truck.

It is with some sadness that we prepare to leave this beautiful place and its wonderful people, but we plan to return.