The World War II museum is billed as the #1 attraction in New Orleans (and #4 best museum in US and #11 in the world) so we decided to make the visit.   We purchased our tickets and were able to thank the World War II veteran sitting at the “I was there” table.  I almost started to cry right then.  He was delightful and seemed very sharp!  When I told the volunteer that my Dad had been in the 82nd Airborne, she suggested that we use our digital dog tag (very cool) to follow James Gavin, who was a paratrooper and later a commander for the 82nd Airborne. 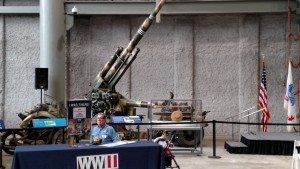 We first watched a movie, which included sound effects, vibrating seats, and lights which helped make the movie “real”.  We happened to sit in a seat donated in memory of an 82nd Airborne infantryman!  We then toured the Boeing display, which houses many WWII vehicles, tanks, and planes, including the completely restored B-17 “My Gal Sal”.  The interactive display “What would you do” described real situations where commanders had to make decisions.  The audience (us) made very different decisions than what really happened – all very safe in our 21st century cocoon of peace. 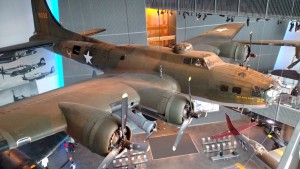 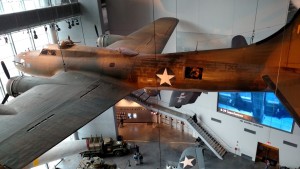 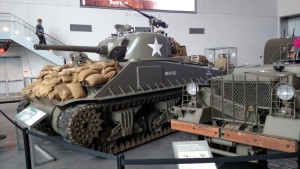 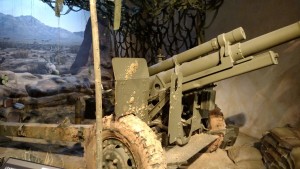 We elected to tour the European theatre first.  The displays are arranged in chronological order, and there are stations where we were able to learn what James Gavin (and Dad) were doing at the time.  My Dad was in the glider division that landed at Normandy – their role was to secure bridges and causeways inland from the beach.  Many gliders and paratroopers were blown off course, but the effort was still successful.   He was there at the Battle of the Bulge and he participated in the liberation of a concentration camp.  (When he responded in Hebrew to one of the prisoners, he said that the old man cried for joy. Dad asked him where he was going to go, the man responded, “To Israel”.)  Dad had many stories, both good and bad, but seeing this museum really drove home why he had such a laid back attitude for the rest of his life.  He said, “After seeing what I saw in the war, nothing can upset me”.

We couldn’t see the Japan section as it was time to leave!  Excellent experience for those who may want to do something other than drink while in New Orleans!  (More about that, later!)