Late Sunday morning we decided to investigate some of the other interesting sights nearby before heading home. Bemus Point had several things listed in the tourist information and it was close to our route home, so we decided to give it a try.

We had put all the travel books in the trunk, so we made an “educated guess” on an address and gave it into Miss Garmin. She did a spectacular job of directing us to 1 First Street, just as we had requested. However, all the numbered streets were really a nice mobile home park on a hill outside of town! Not exactly what we were looking for.

Next try we gave her “The Italian Fisherman Restaurant” and that was perfect. Bemus Point is approximately at the center of this long, fairly narrow lake, and is at the narrowest point in the body of the lake. It has been a transportation and business hub since the very early 1800’s. One stately old hotel is still serving guests after 134 years!

But this is what we were looking for. “The Italian Fisherman” sits right on the water and next to the “Floating Stage” where bands, musical performances, vocal competitions, etc. occur every week-end of the summer. We sat on an second story outside deck overlooking the little bay formed by Bemus Point, watching the power boats & skiers going past. Blue skies, great weather! 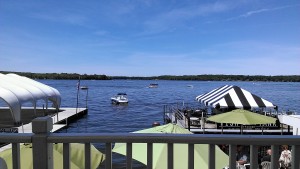 A walk past the old hotel and the new condos took us out onto the point which included another restaurant with an indoor ice cream stand. A strawberries-and-cream and a mint-chocolate-chunk later we were sitting along the water’s edge in the shade of a big oak.

Ice cream gone, we walked along the piers, saw Mamma Mallard and her brood. Then headed back to reality.