After leaving Sedona we headed to Albuquerque for a couple days of “vacation” before starting our new volunteer position at Bosque del Apache.  Our first surprise was the driving distance from one to the other — over 375 miles and with a time change about 8 hours!

We had friends who had recommended Garduno’s Restaurant for a good Mexican meal, so after arriving in Alburqueque, we went downtown to the Hotel Albuquerque and enjoyed a good meal at Garduno’s sitting in their patio. 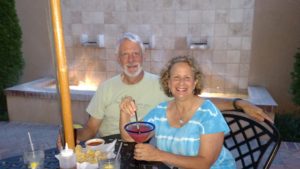 Friday was a busy day.

We started at the Petroglyph National Monument where they say there are over 20,000 ancient petroglyphs.  We did not hike all of their trails to see “all” of the petroglyphs, but we did visit three trails and saw some interesting items. 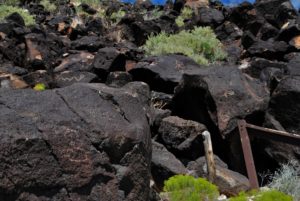 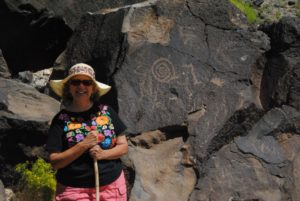 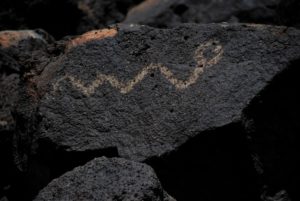 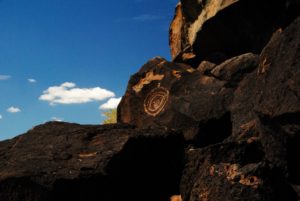 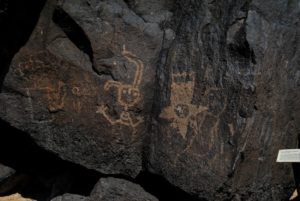 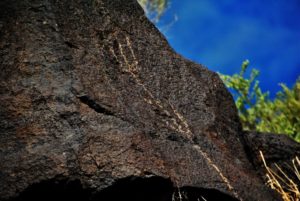 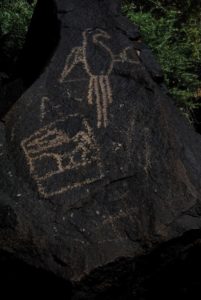 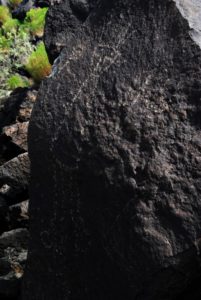 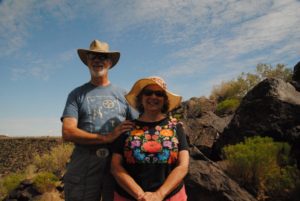 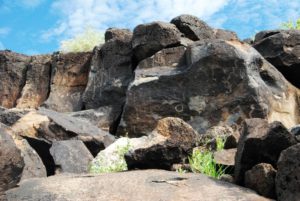 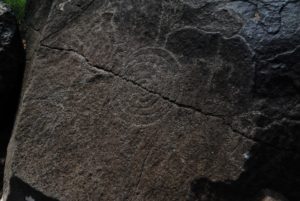 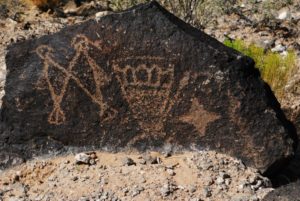 We then visited the Pueblo Cultural Center, which represents all 19 New Mexico Pueblos — each a distinct entity with separate lands and languages, but similar belief structures and probably similar ancient origins.  It was a very interesting and moving experience, focusing on the common beliefs of these peoples and on their history — which of course includes problems with the Spanish, Mexican, and American authorities.  The Center was extremely well done, and we came away richer for the experience. 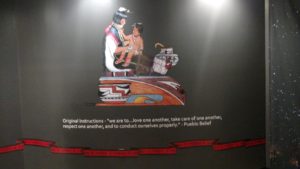 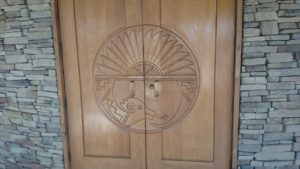 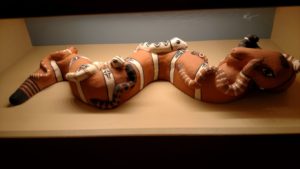 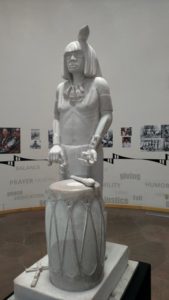 Rounding off the day for Friday, we went to Sandia Peak.  This is a peak with an elevation of 10,378 (almost a mile above downtown Albuquerque) and is accessed by the worlds longest commercial ariel tramway.  The views were breathtaking.  We hiked a short portion of the crestline trail, which was also breathtaking as we attempted to hike at over 10,000 feet!  Some rain storms rolled in over parts of ABQ which provided additional visual interest. 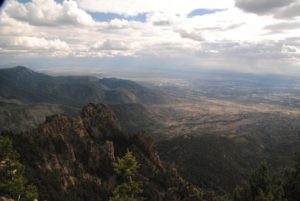 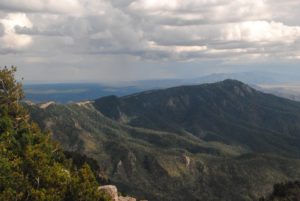 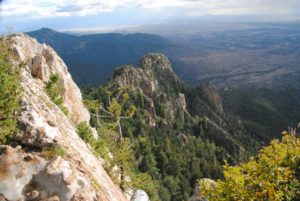 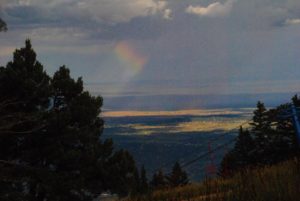 Saturday we went to Acoma Pueblo – Sky City.  This is a mesa top settlement that has been occupied since the 13th century and is the oldest continuously inhabited settlement in North America.  The Acoma people practice a matriarchal property system (the wife/mother owns everything, so the children are always provided for).  All of the 500+ dwellings on the mesa are privately owned by members of the Acoma community, so there was a mixture of well maintained and not-so-well maintained dwellings.  Since there is no running water or electricity, many of the dwellings are only occupied at the time of festivals or special events.  Single ladders indicate entrances to private homes; double ladders are entrances to Kivas.  The views from the mesa were fantastic.

Also, the scenery on the drive to and from the mesa was amazing! 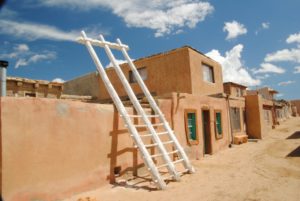 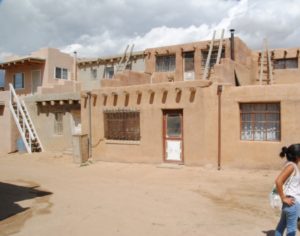 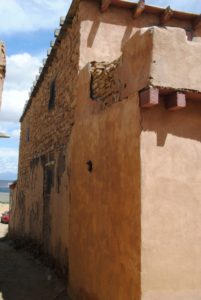 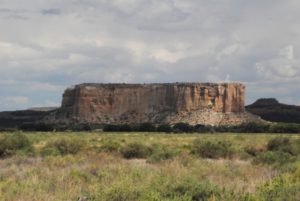 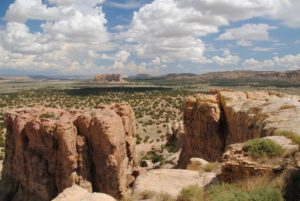 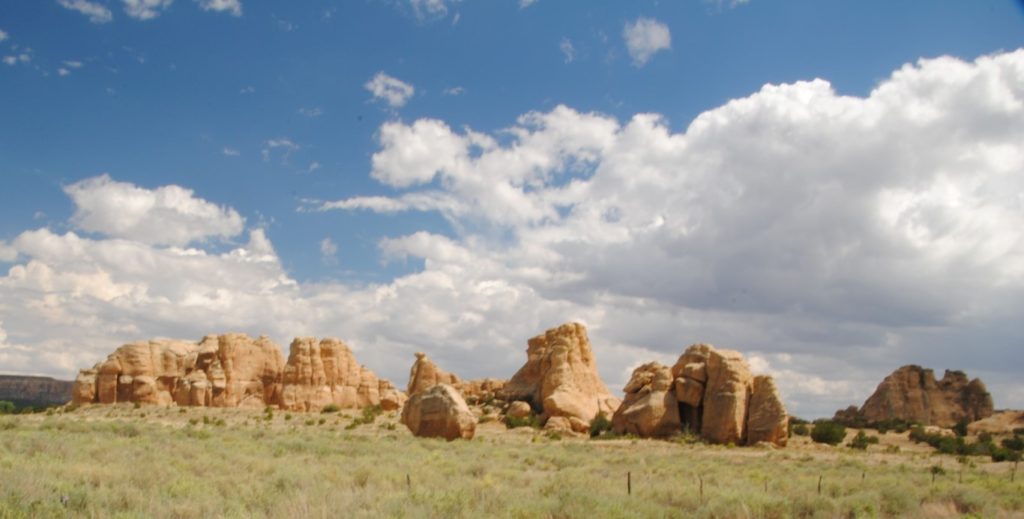 The RV Park we stayed at near ABQ was a delight.  Close enough to town to be convenient, but on the edge of the high desert.  They had a variety of “classic” cars and trailers. 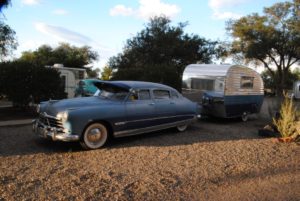 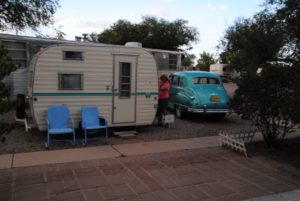 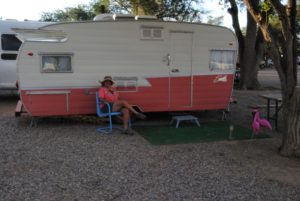 Sunday we drove to Bosque del Apache NWR and got set up.  Monday we started training in the visitor’s center and on the 57,331 acre refuge.  While on the trails we saw several new-to-us species of birds:  White Fronted Goose, White Faced Ibis, American Avocet, and Mexican Duck among them.  We also saw a group of about 20 Wild Turkeys, 4 Mule Deer, plus both coyote and mountain lion scat.  Talk about exciting!!!

The staff and other volunteers have been very welcoming and friendly.  We were absolutely surprised when one of the other volunteer couples is Kathy & Bob Hailey — Kathy was a volunteer with us at Casa Grande Ruins NM.  We will continue our training on Thursday and will begin our regular schedule next weekend.